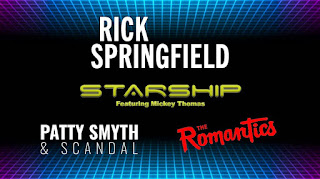 There’s an ‘80s On The Fox event coming up at the Thomas J. Weisner RiverEdge Park in Aurora this Saturday featuring The Romantics and three other well-known acts. My wife Pam and I saw a Roger Whittaker concert in Aurora when we first started dating, so you can definitely drive there from Chicago. In addition to The Romantics, the ‘80s On The Fox lineup includes Rick Springfield, Patty Smyth and Scandal, and Starship. Eddie Money was scheduled to perform but had to cancel because he’s recovering from recent heart surgery. Hope he’s well soon.

Other shows coming up at RiverEdge Park include Roger Whittaker (just kidding), The Mavericks with special guests Los Lobos on July 26, and Poi Dog Pondering on August 24.

The Lapidos Family is mailing out cards promoting its Fest For Beatles Fans – Chicago event coming up August 9 – 11 at the Hyatt Regency O’Hare in Rosemont. This year’s headliners are Denny Laine, Laurence Juber, and Steve Holley from Wings; Alan White from Yes; Jeremy Clyde from Chad and Jeremy; Liverpool, and The Weeklings. Local musicians Phil Angotti, Jay Goeppner, and School Of Rock are scheduled for sets on the Apple Jam Stage, and the card promises more Apple Jam acts will be announced.

Tomorrow (June 27) is the last day you can see Echo In The Canyon, director Andrew Slater’s critically acclaimed 2019 documentary about the fertile music scene that developed in California’s Laurel Canyon during the 1960s, at the Music Box Theatre on Southport. The film features interviews with Graham Nash, Brian Wilson, Ringo Starr, Eric Clapton, Jackson Browne and Tom Petty. Show times for Echo In The Canyon tomorrow at the Music Box are 2:00, 4:30, 7:10, and 9:15.
Posted by Terry Flamm at 8:35 PM