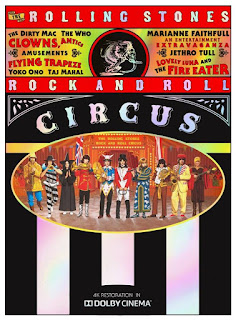 April is always an adventurous month in the Chicago area, and that holds true for 2019 even with C2E2 and the CHIRP Record Fair moving to March and May respectively. Here’s a quick look at what to expect. I’m sure I’ve missed some worthy events, but I’ll keep watching social media and the local press and posting April updates.

Any month that kicks off with Mott The Hoople’s first Chicago concert in 45 years has to be considered outstanding. Ian Hunter, Morgan Fisher, and Ariel Bender—the heart of the U.K. band’s 1974 lineup—will be at the Chicago Theatre this Wednesday, April 3.

A recently restored print of the 1968 BBC special The Rolling Stones Rock And Roll Circus will be shown in select theaters today through Wednesday. The Beatles and The Who are among the other top notch English bands featured in the show. See the website for a theatre near you.

If you think you’re in love with eccentric British rocker Robyn Hitchcock, this has been an exciting few months for you. He’s back for another gig in the Chicago area, this time on April 3 at SPACE in Evanston.

Fee Waybill will lead The Tubes into St. Charles this Thursday night for a performance of the band’s The Completion Backward Principle album. Chicago-based power pop masters Off Broadway are the opening act.

Lily Hiatt, daughter of John, and an engaging performer in her own right, will be at FitzGerald’s this coming Friday, April 5.

Power pop master/singer-songwriter Marshall Crenshaw and roots rock/pop band The Bottle Rockets have two shows in one day at The Old Town School of Folk Music this coming Saturday, April 6.

Chicago area supergroup and amazing vocalists Flat Five will be at FitzGerald’s on April 13.

Singer-songwriter and New Pornographers member Neko Case is playing at The Vic Theatre on April 26 and 27.

The Social Act will be performing at Martyrs’ on Friday, April 26. Soul Honey Records and Liz Toussaint will also be on the bill that night.
Posted by Terry Flamm at 9:30 PM