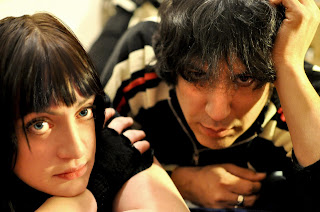 I got you, babe. Photo from The Sonnets Facebook page.

I wasn’t able to post a Slumgullion last night because I was out making merry at the International Pop Overthrow - Chicago showcase at LiveWire. It was great to see a full house at the Milwaukee Avenue venue and be able to stay a bit later since I didn’t have to be up at quarter to five the next morning for work. I still wasn’t able to stay late enough to catch the sets by Thrift Store Halo and BingBong. Waiflike, The Unswept, Collectors, and The Spindles all performed well and I enjoyed having a chance to talk with the musicians before and after their sets. IPO Chicago wraps up with two separate showcases today, with at least 11 acts—depending on a TBA—scheduled to perform.

Larry O’Dean, Jimmy De Lauriea, Mike Ebersohl, AKA The Injured Parties, kick off the afternoon showcase at 2:00 p.m. with their clever and catchy power pop tunes. Singer-songwriter Celia Rose works in a folk rock vein, and aims to add a bit of Haitian flavor to her songs. Freetoed has performed at a number of IPO - Chicago shows in the past, with an alt rock sound that’s influenced by Wilco, Pearl Jam, and Bon Iver. The IPO website has a TBA in the middle of this afternoon’s showcase, followed by singer-songwriter Tom Schraeder, who describes his genre as GUSH because he likes the freedom explore any type of music that interests him. Kenosha, WI trio Rainy Day Crush wraps up the first showcase with music thats “too catchy to be indie, too honest to be pop.”

Later today, the very last IPO - Chicago showcase of 2019 opens with an intriguing mix of glam, mod, power pop, garage, surf, and blues from The Sonnets. Guitarist-vocalist Vee Sonnets and bassist-vocalist Ellie Maybe are the nucleus of this trio, along with a core of drummers they can choose from as needed. The acoustic folk duo Douglas and Tucker is up next, followed by Andrew Fraker and Sons, an alt rock band not really made up of a Dad and his kids. These guys draw influences from The Rolling Stones, Counting Crows, and U2. The Band Calderisi is led by singer guitarist Anthony Calderisi, who enjoys mixing hard-hitting guitar playing with harmony vocals. The trio The Mixture likely takes its name from its mission to blend equal parts of psychedelic rock and soul, and Young Distractions, the final act for this year’s IPO Chicago will be the garage-punk-power pop trio.

Check out the official International Pop Overthrow website for links to all of the above listed bands.
Posted by Terry Flamm at 12:15 PM