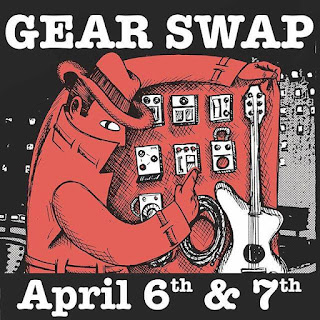 The 3rd Annual Alchemy Audio Gear Swap is being held at Fort Knox Studios tomorrow and Sunday. In addition to several vendors offering musical instruments, there will be live music and food trucks. Fort Knox Studios is located at 4256 N. Knox in Chicago.

Power pop singer-songwriter Marshall Crenshaw and roots rock/pop band The Bottle Rockets have a show together at 5:00 p.m. and another at 8:00 p.m. tomorrow at The Old Town School of Folk Music.

Best wishes for a quick recovery to Mick Jagger, who recently underwent successful surgery to replace a heart valve. The Rolling Stones have postponed their upcoming tour until Jagger is well enough to prowl the stadium stages of the world again. Their upcoming compilation Honk (out April 19) features “36 fan favorites and rarities” and there’s a bonus version that offers 10 live songs.

Happy Birthday to Allan Clarke, who served as the lead vocalist for The Hollies from 1962 until his retirement in 2000. (There were a few times in the 1970s when he went AWOL to pursue a solo career.) His distinctive voice can be heard on several Top 40 Hits, including “Look Through Any Window,” “I Can’t Let Go,” “Long Cool Woman,” “He Ain’t Heavy, He’s My Brother,” and “The Air The I Breathe.”

I’m not sure how the subject came up, but Little Steven Van Zandt recently tweeted his admiration for the original British Invasion band Herman’s Hermits and lead vocalist Peter Noone in particular. You can judge for yourself when Noone brings the latest version of the Hermits to The Arcada in St. Charles on June 9.

Other interesting shows coming up at The Arcada include the Crosby, Stills, Nash and Young tribute band Marrakesh Express on June 7; Micky Dolenz from The Monkees on September 22; and Adrian Belew on October 2.

The BBC News Instagram site recently reported that numerous citizens filled the streets in Budapest, Hungary to take part in a Silly Walk Day. The event was inspired by a vintage skit from the Monty Python’s Flying Circus TV show. It’s a safe bet none of them were as funny as Python member John Cleese was in the original bit.

Boston-based alt rock band Guster will be playing “Satellite” and other hits at the Riviera Theatre on Saturday, April 13 as part of its Look Alive World Tour Of Most Of America And Parts Of Southern Canada itinerary. It’s a WXRT show.

International Pop Overthrow - Chicago starts next Friday, April 12 and runs through Saturday, April 20 at LiveWire Lounge on Milwaukee Avenue. This year’s schedule of multiple band showcases is packed with local acts and visitors from around the country. See the website for the full schedule and links to most of the participating artists.

As noted in the Illinois Entertainer, new albums due out this month include King’s Mouth by The Flaming Lips on April 12; Social Cues by Cage The Elephant and Jade Bird by Jade Bird on April 19; and Warp and Woof by Guided By Voices, Stay Around by J.J. Cale, and In The End by The Cranberries on April 26. This month’s issue also the publication’s annual lowdown on all the Record Store Day releases.

Fans of rock stars and legendary baseball players can combine those interests in a single trip to Cooperstown, NY. The Fennimore Art Museum’s Herb Ritt: The Rock Portraits exhibit runs through Labor Day, and Cooperstown is also the home of The Baseball Hall Of Fame.

Lifeline Theatre’s current staging of Frances Limoncelli’s adaptation of author Jon Scleszka and artist Lane Smith’s book The Time Warp Trio continues its run through April 20. Shows are at 11:00 a.m. and 1:00 p.m. on Saturdays and Sundays.

The Reckless Records store at 3126 N. Broadway is moving after having been at that location for 30 years. Its new home will be at 929 W. Belmont near the Red Line stop. Reckless Records also has stores at 1379 N. Milwaukee Avenue and downtown at 26 E. Madison. All three are recommended for you Record Store Day shopping on April 13.

I’ll bet the whale is a basso profundo. The Chicago Opera Theater is staging Moby Dick at the Harris Theater on Thursday, April 25 and Sunday, April 28. Based on Herman Melville’s novel, it features music by Jake Heggie and libretto by Gene Scheer. Moby Dick will be conducted by Lydia Yankovskaya and directed by Kristine McIntire.
Posted by Terry Flamm at 9:53 PM