IPO - Friday On My Mind 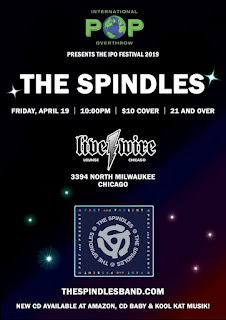 International Pop Overthrow – Chicago wraps up its 2019 visit this weekend at LiveWire on Milwaukee Avenue, with 18 bands scheduled over one showcase on Friday night and two on Saturday. It’s the first year IPO has been staged at LiveWire, and the venue has proved to be a good fit. I’ve enjoyed early sets by Magnaphonic, Van Go, and Michael Steven Cohen (knowing I have to be up at 5:00 a.m. for work keeps me from staying late), and there are still a number of good acts  to check out.

Tomorrow night’s event kicks off at 8:00 p.m with Waiflike, a Chicago garage rock band led by Richard Neal. Those delightful British imports The Unswept will be showcasing catchy songs from their brand new album Minor Blemishes, as well as previous releases. IPO veterans Collectors will be playing “expertly crafted Brit influenced indie rock” led by vocalist-guitarist Michael Mazza. The Spindles, another act with plenty of IPO experience, have several first-rate songs they could perform from their 2018 album Past and Present, including a ringing cover of The Hollies’ “Look Through Any Window.” Thrift Store Halo has been racking up airtime on indie radio with songs from their 2017 Pop-Rocket album, and they have the five-song EP Consolation Prize Fighter coming out soon. Friday night’s showcase ends with a set by Madison, WI quartet BingBong, who be playing “rock that’s poppin’” according to their Facebook page.

Check the International Pop Overthrow website for links to most of the above mentioned acts, as well as for both of Saturday showcases.
Posted by Terry Flamm at 10:18 PM