RSD AND IPO - In The Know 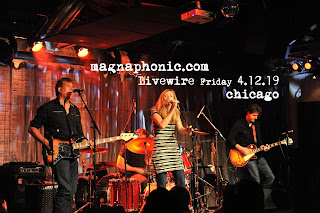 The 12th Annual Record Store Day takes place around the world this Saturday, and various stores in the Chicago area will be offering a party atmosphere along with stacks of exclusive vinyl. International Pop Overthrow returns to Chicago on Friday night for the first of 12 showcases scheduled through May 20. On Saturday, local music fans might have some tough decisions to make regarding RSD festivities and an afternoon IPO showcase.

International Pop Overthrow festivals are staged in cities in America, Canada, and Europe on an annual basis. For the most part, CFO/Founder David Bash books local acts in each city but out-of-town guests are not unusual. This year, the Chicago festival is being held at the LiveWire venue at Milwaukee Avenue. Catherine Tecktiel from Magatha Trysty kicks things off Friday at 8:00 p.m. Magnaphonic, led by vocalist Marianne Galassini and bassist-vocalist Mike Galassini, has been MIA on the local scene for a few years, so it will be great to see them back on stage playing their irresistible power pop. Too Much Saturn and King Mixer (AKA Eric Howell) are well-regarded IPO veterans, and the other local bands scheduled for Friday night are Gal Gun and Reaction.

The Saturday afternoon showcase is the one that competes with the Record Store Day events. It climaxes with psychedelic guitar slinger Jeremy Morris performing songs from his numerous albums. Prior to his 5:45 set, there will shows by Blameless Lake; The Pickpockets; The Francos; Canadian alt rockers Rosa Cora Perry and The Truth Untold; and Kontrolled Kaos.

Saturday night’s showcase closes with three top notch acts—The Jay Goeppner Band; The Bishop’s Daredevil Stunt Club; and Enuff Z’nuff. Prior to them, there are three bands I’m not familiar with—Steve Ramone and The Pensioners; Beyond; and Athanor.

Check the official International Pop Overthrow website for links to most of the above mentioned acts, as well as the entire schedule through Saturday. April 20.

Alt rock band whitewolfsonicprincess will be performing outside Vintage Vinyl in Evanston at 10:45, 15 minutes before the store opens. Later, wwsp will be at Squeezbox Books and Records (also in Evanston) at 3:00 p.m.

The April issue of the Illinois Entertainer and this week’s edition of The Reader have features on Record Store Day. Copies of these free publications can be found in record stores and venues in the downtown and north side areas.
Posted by Terry Flamm at 11:08 PM