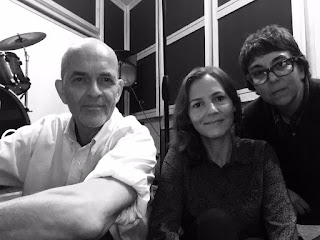 See these guys perform some of the best songs of 2018 at RSD tomorrow.
Photo from the Sunshine Boys Facebook page

Tomorrow is Record Store Day around the world. Best of luck to everyone who’s getting up early to hunt down those one-day-only vinyl releases. Be sure to hang out at your favorite store and celebrate.

Here’s another option to go with yesterday’s post about RSD in-store entertainment in the Chicago area. Bric-A-Brac Records on Diversey will have a 3:00 p.m. live performance by Sunshine Boys, whose Blue Music album was one of 2018’s best releases. Ethers; The Weekend Run Club; Roy Kinsey; Usurfruct; and Surly will also be performing; and the Lost Lake DJs—Sonoroma Chicago, Tim Kinsella, Jenny Pulse, and Jessie Oleson—will be spinning records.

Laurie’s Planet Of Sound has been been my favorite RSD celebrating spots for years, and even though I’m disappointed they’re not having live bands tomorrow, I have faith that the DJs picked by management will be rocking the place. Those DJs are: the single-named employee and WNUR air personality Lou; Melissa “DJ Tainted Love” from BLVD Records/Logan Arcade; rocker and ex-employee Alex White; store owner John Laurie; and employee and Late Bar resident Samorama.

WXRT will be playing albums sides on vinyl tomorrow in honor of Record Store Day. The spins kick off immediately after Saturday Morning Flashback. Longtime XRT listeners will no doubt remember the days when pretty much all the music on the progressive rock station flowed from turntables (and sometimes skipped or got stuck.)

International Pop Overthrow kicks off tonight at 8:00 p.m. at the LiveWire venue on Milwaukee Avenue. Catherine Tecktiel from Magatha Trysty; Magnaphonic; Too Much Saturn; King Mixer (AKA Eric Howell); Gal Gun; and Reaction are scheduled to perform.

Check the International Pop Overthrow website links to most of the above mentioned acts, as well as the entire schedule through Saturday, April 20.

The power pop band Go Time are IPO veterans but they won’t be at LiveWire tomorrow night. They have record release show for their latest effort Midway at Silvie’s on Irving Park Road. Midway finds these guys in top form with hard-hitting, guitar-powered arrangements and Scott Niekelski’s distinctive vocal delivery.

Boston-based alt rock band Guster will be playing “Satellite” and other hits at the Riviera Theatre tomorrow night as part of its Look Alive World Tour Of Most Of America And Parts Of Southern Canada itinerary. It’s a WXRT show.

Chicago area supergroup and amazing vocalists The Flat Five have sold out their show tonight at Hey Nonny in Arlington Heights, their show tomorrow night at FitzGerald’s in Berwyn, and even an October 9 show in Wisconsin.

The Chicago Filmmakers Spring Screenings series continues on April 27 with CFA Out Of The Vault: How We Work, an assortment of short films from the 1970s and ‘80s selected by Abigail Child, Loretta Smith, and JoAnn Elam. The focus will be on women in the workforce. Loretta Smith is expected to attend. On May 4, Michael Glover Smith’s acclaimed film Rendezvous In Chicago will be screened.

Lifeline Theatre’s current staging of Frances Limoncelli’s adaptation of author Jon Scleszka and artist Lane Smith’s book The Time Warp Trio continues its run through April 20. Shows are at 11:00 a.m. and 1:00 p.m. on Saturdays and Sundays.