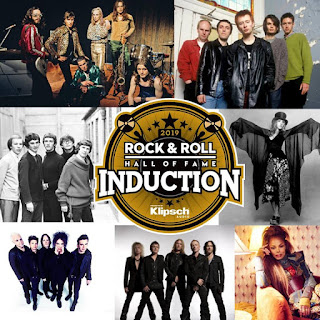 Congratulations to Roxy Music; Def Leppard; The Zombies; Janet Jackson; The Cure; Radiohead; and Stevie Nicks on being this year’s inductees to the Rock And Roll Hall Of Fame. The ceremony is being held tonight in Brooklyn. One highlight will surely be when The Zombies are presented by Bangles vocalist-guitarist and lifelong British Invasion fan Susanna Hoffs. HBO will have an official broadcast on April 27.

Roxy Music’s eternally suave lead vocalist Bryan Ferry will bring his 2019 tour to our area for a show at the Chicago Theatre on August 1.

Tickets went on sale today for Andrew Bird with Madison Cunningham at the Chicago Theatre on July 16; and the Fleetwood Mac tribute act Tusk at City Winery Chicago on April 7.

Congratulations to my nephew Joe Flamm on his new modestly titled website Joe Flamm is just a chef from Chicago. The site covers how he won Top Chef Season 15 on the Bravo Channel; his current gig as the Executive Chef at Spiaggia; previous restaurants he’s worked at; his world travels; family; and friends.

Jenny Lewis will be showcasing songs from her new On The Line album at the Riviera Theatre tomorrow night. Peter Himmelman will be performing at The Old Town School Of Folk Music tomorrow night. His “Susan I Owe You An Apology” is one of the most poignant songs ever recorded about appreciating what you have in life. Other gigs coming up next week at that venue include Adrian Belew with special guest Saul Zonana on Thursday; and Marshall Crenshaw and The Bottle Rockets on Saturday.

A recently restored print of the 1968 BBC special The Rolling Stones Rock And Roll Circus will be shown in select theaters next Monday through Wednesday. Chicago area theaters screening the event include the CMX Old Orchard Cinebistro in Skokie; Marcus Gurney Mills Cinema in Gurnee; and the Regal City North 14 in Chicago.

Mott The Hoople, with Ian Hunter, Morgan Fisher, and Ariel Bender onboard, will bring their ’74 Concert Tour to the Chicago Theatre next Wednesday, April 3. According to Joshua Miller’s full-page article in today’s Chicago Sun-Times, it’s the band’s first show here in 45 years, and one of the only eight cities it will play on its current American tour. The Chicago Tribune’s Gerg Kot also posted an interesting article about Mott The Hoople today.

Also on April 3, Robyn Hitchcock will be rocking tunes like “So You Think You’re In Love,” “Balloon Man,” and “Adventure Rocket Ship” at his sold out show at SPACE in Evanston. Later next week, Lily Hiatt, daughter of John, will be at FitzGerald’s in Berwyn on Friday.

Chris Jones reports in today’s Chicago Tribune that Four Chords and a Gun, a play about The Ramones working in the recording studio with Phil Spector, is coming to the Broadway Playhouse in Chicago on May 18.

Lifeline Theatre’s current staging of Frances Limoncelli’s adaptation of author Jon Scleszka and artist Lane Smith’s book The Time Warp Trio is running through April 20. Shows are at 11:00 a.m. and 1:00 p.m. on Saturdays and Sundays. In between shows, kids can enjoy a production of Lifeline Theatre’s Stories Come Alive! series.

The next Rock ’N Roll Ala Mode karaoke event at Christie’s Dairy Delights in Palatine takes place next Wednesday night. There is a suggested donation of $10.

I had a fun time last Saturday at the C2E2 convention in McCormick Place and was able to hand a Broken Hearted Toy button to David Tennant of Doctor Who, Jenny Jones, and Broadchurch fame as we talked during an autograph session. He was extremely friendly and outgoing with all the fans. I mentioned how much I enjoyed his podcast with current Doctor Who star Jodie Whittaker.

Fee Waybill will lead The Tubes into The Arcada in St. Charles next Friday night for a performance of the band’s The Completion Backward Principle album. Chicago-based power pop masters Off Broadway are the opening act that night.

I was sad to hear that The English Beat’s “Ranking Roger” Charlery has passed away. He and fellow vocalist Dave Wakeling provided powerful vocals to go with the band’s irresistible ska rhythms. I still remember the excitement of listening to The English Beat’s first album.
Posted by Terry Flamm at 10:04 PM