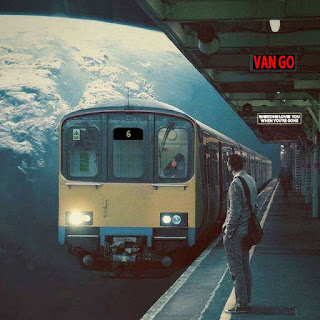 Everyone loves you when you rock. Van Go, the Chicago band with an impressive track record of putting hard-edged power pop songs with barbed lyrics on its albums, has a gig tomorrow night at The Gallery Cabaret in the Bucktown neighborhood. Everyone Loves You When You’re Gone, the latest release from Van Go, has turned up on a lot of blogs as one of the top albums of 2018. Eclectic rockers Red Wigglers are also on the bill.

March has arrived, bringing more hours of daylight, warmer temperatures, and lots of entertainment. Here are some of the events going on this month: Graham Nash at The Athenaeum Theatre on March 17; Jeff Tweedy at The Vic on March 22; C2E2 (Chicago Comic and Entertainment Expo) at McCormick Place on the weekend of March 22–24; Old 97’s at Thalia Hall on March 28; and Jenny Lewis at the Riviera Theatre on March 30.

New albums due out this month include Still On My Mind by Dido next Friday; Lux Prima by Karen O and Danger Mouse and a self-titled effort from Brian Jonestown Massacre on April 15; My Finest Work by Andrew Bird and On The Line by Jenny Lewis on March 22; and Happy Now by Gang Of Four, You’re The Man by Marvin Gaye, and Deserted by The Mekons on March 29.

The above information comes from this month’s Illinois Entertainer, which also includes writer Tom Lanham’s interview with Suzi Quatro about No Control, the new album she has coming out later this month.

The Chicago Irish Film Festival, marking its 20th anniversary of “Celebraring Films From The Land Of Storytelling,” opened today and will run through Sunday. Films will be screened at Theater on the Lake, The Logan Theatre, and Gallery Theatre.

Singer-songwriter Dimitri Martin’s Wandering Mind Tour brings him to The Vic Theatre in Chicago tomorrow night. He’s sold out the 7:30 p.m. show but tickets are still available for the 10:00 p.m. show.

Mapplethorpe, Ondi Timoner’s 2018 “fictionalized biopic” of photographer Robert Mapplethorpe starring Matt Smith of Doctor Who and The Crown, had its first Chicago showing at the Gene Siskel Film Center tonight. It runs through March 7. Smith will be at this year’s C2E2 at McCormick Place later this month, along with fellow Doctor Who stars David Tennant and John Barrowman.

Tickets went on sale today for two shows by Robbie Fulks at the Evanston History Center on May 19; Smoking Popes ar Bottom Lounge on May 10 and 11; and Al Stewart at City Winery Chicago on June 3.

Local bands Sonia Dada; The Way Moves; Nicholas Tremulis and The Prodical 9; and Dick Holiday and The Bamboo Gang join host WXRT air personality Lin Brehmer for Kocour Fest – A Celebration of the Life of Steve Kocour on March 11 at Metro. Kocour was a highly regarded and popular sound/lighting expert and teacher who worked with several bans in the Chicago area.

Christie’s Dairy Delights in Palatine will have its first Creative Tribal Collab of from 7:00 p.m to 9:00 p.m March next Friday. Musicians, poets, and comedians are encouraged to arrive early if they want to participate in the open mic event.

If you missed Off Broadway at Reggies Rock Club last Saturday, you’ll have another chance to see them when they open for The Tubes at The Arcada in St. Charles on April 4.

I took my weekly after-work trip to downtown Chicago today to check on the Reckless Records on Madison. The staff is always hip and friendly, and the 45 RPM records bin has an ever-changing selection of picture sleeves. I picked up a copy of the David Bowie/Pat Metheny Group song “This Is Not America” from the movie The Falcon And The Snowman.