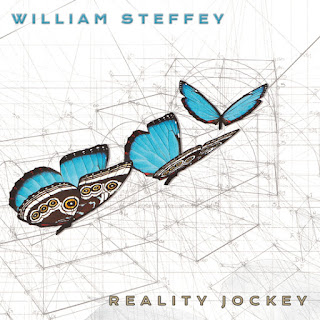 Singer-songwriter William Steffey’s 12th solo album Reality Jockey is now available on CD, vinyl, and digital. He has a release party coming up this Friday at the Esquina venue at 4602 N. Western in Chicago. Admission is free and there will be food, drinks, and a raffle. In my review of a previous Steffey effort, Love And Armageddon, I praised the well-crafted pop of “This Show Must Go On” and noted that “Had To Pay” brings to mind Chris Stamey and Crowded House.

New York alt rock veteran Karen Haglof has just released her third solo effort, a 14 track album titled Tobiano. Mitch Easter of Let’s Active fame and Peter Holsapple from The dB’s are among the guest musicians, and Easter mixed the album. Bassist-backing vocalist Steve Almaas played throughout Tobiano and served as producer; CP Roth played drums and piano. As on her 2016 effort Perseverance and Grace, Haglof takes an off-kilter but inviting approach to melodic roots rock songs. I’m hoping to do a more extensive review in the future.

Chicago-based indie Preserve Records is presenting a label showcase at Montrose Saloon next Monday night starting at 8:00 p.m. Friends Of The Bog, the folk-oriented band that played a huge role in creating Preserve Records a little over a year ago, will be performing. Nire Nah, Hal Baum, Pontac, Vender and The Cobras, and To Do List are also scheduled to play at this free event.

As reported by Chris Jones in a recent edition of the Chicago Tribune, a Cubs musical titled Miracle - A Musical 108 Years In The Making is coming soon to the Royal George Theatre at 1641 N. Halsted Avenue. According to lead producer William Marovitz, Miracle celebrates the relief and exuberance long-time fans felt when the Cubs won the World Series in 2016. Judging from the drunken Cubs fans I’ve seen stumbling onto the Metra Northwest line at the Irving Park stop on summer nights, A Musical 108 Beers In The Making might be a more apt subtitle. Seriously, this does sound like a fun show, especially since the Cubs have agreed to allow Marovitz to use official footage from the team’s championship year.
Posted by Terry Flamm at 7:59 PM