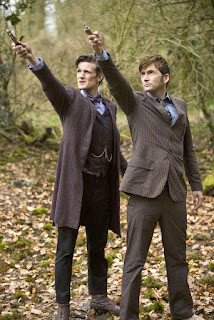 Somewhere in the Brokenhearted Toy archives there’s another Doctor Who-related post named Doctor Doctor. It explores how David Tennant, then the current actor playing the lead role in the long-running British sci-fi series, was being called the best Doctor since the legendary Tom Baker. When Tennant later announced he was leaving the show, it was hard to see how anyone could follow him.

Luckily, his successor Matt Smith would bring his own distinctive style, and become a social media sensation, along with The Ponds, played by Karen Gillan and Arthur Darville. Smith’s take on The Doctor was as different from Tennant’s as Tennant’s was from Baker’s, and yet it was easy to believe that all three were the same character. Smith and Tennant generated great chemistry when they joined forces on the 50th Anniversary Doctor Who Special Day Of The Doctor.


Both actors have gone on to successful roles in films and television. Tennant has appeared in the Jessica Jones series and starred in British and American versions of the mystery drama Broadchurch. More recently, he portrayed religious fanatic John Knox in the Mary Queen Of Scots movie. He now has a podcast where he’s chatted with the current Doctor Jodie Whittaker and his former companion on the show, Catherine Tate, as well as celebrities like Whoopi Goldberg. Matt Smith has portrayed Prince Philip in The Crown, and also played avant garde photographer Robert Mapplethorpe in the indie film Mapplethorpe.

If all had gone as scheduled, fans attending C2E2 at McCormick Place in Chicago this weekend would have been in for a treat because Smith and Tennant were among the celebrity guests. Unfortunately, I just discovered tonight that Smith has cancelled, so their joint photo op session and panel discussion will have to wait for another time and place.
Posted by Terry Flamm at 9:53 PM