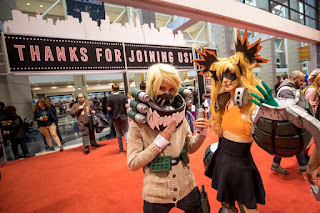 C2E2 has returned to the Chicago area for a weekend run at McCormick Place on the lakefront. This year’s celebrity guests include Paul Rudd, Ming-Na Wen, David Tennant, Dave Mustaine, Alicia Silverman, Colin Donnell, John Barrowman, Summer Glau, and Svengoolie, as well as several popular artists and writers. It’s like a huge Halloween party where fans dress up as their favorite heroes and villains, and you can buy action figures, posters, t-shirts, comic books graphic novels and all sorts of imaginative collector’s items.

Penn and Teller will be bringing their astounding tricks and acerbic humor to The Chicago Theatre on November 8.

The Imperial Sound will be performing some new material tomorrow night at Montrose Saloon, along with those classy soul, jazz, and rock tunes from its stellar debut effort The New AM. And on a somehow related note, veteran rockers The New Duncan Imperials have a new EP titled Hunny Bunny coming out on April 6.

Stray Cats 40, the first album from The Stray Cats in 26 years, comes out May 24, and they’ll be starting an American tour that will not take them to Chicago, in August.

The Center Of Nowhere, a new documentary about the fertile but undiscovered music scene in Springfield, Missouri, will be screened on Thursday, April 4 at the Music Box Theatre on Chicago’s north side. The film, which was written and directed by veteran journalist Dave Hoekstra and co-produced with Jamie Ceaser, focuses on roots rock. The Skeletons, Brenda Lee, Dave Alvin, Robbie Fulks, Syd Straw, Merle haggard, and Jonathan Richman are among the acts featured.

Fastball, of “The Way” fame, recently played its first UK gig in 20 years, in London. The colorful gig poster depicts the wandering couple walking away from their broken-down car. I'd like a copy.

Durty Nellie’s has made a quick comeback after a fire severely damaged the Palatine music venue a few months ago. It wasn’t open in time for its annual St. Patrick’s Day bash, but upcoming events are already being scheduled, including Local H on June 14.

The Chicago Philharmonic, led by composer and conductor Tom Nazziola, will provide a live soundtrack for a trio of vintage silent films at 4:00 p.m. this Sunday at the North Shore Center in Skokie. The Silent Sherlock event will present Buston Keaton’s Sherlock, Jr. as the main feature, along with Fadeaway with Koko the Clown and Sure-locked Holmes with Felix the Cat. Tickets range from $25 to $75.

Jenny Lewis will be performing songs from her latest album On The Line next Saturday night, March 30 at the Riviera Theatre on Chicago’s north side.

Great Moments In Vinyl, a rotating collective of local musicians who pay tribute to iconic albums, will be covering Paul Simon’s Graceland next Thursday, March 28 at Martyrs’ on Lincoln Avenue.

Singer-guitarist Christopher David is an author as well as a member of the Chicago band Magatha Trysty and a prolific solo artist. His new, “hard R-rated” novel The Hook Slips is now available on Amazon.

Theatre Nebula’s production of the Duncan Sheik/Steven Sater musical Spring Awakening continues its run at Cutting Hall in Palatine through this weekend. Kevin Wiczer directs a cast of 13, with choreography by Kristine Burdi.

More exclusive vinyl releases have been added to this year’s Record Store Day list, including efforts by Peter Gabriel, Generation X, John Hiatt and his daughter Lily Hiatt, L7, and Queen. If you haven’t checked the official website in a while, it’s worth another look.