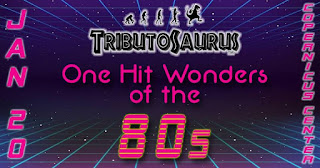 Tributosaurus continues its Signature Series at the Copernicus Center on Chicago’s northwest side on January 20 with One Hit Wonders of The 80s. The commercial for this event on WXRT features the song “Tainted Love” by Soft Cell, which is a good indication that this will be a fun show. Tributosaurus is one of Chicago’s best known tribute acts, and has been known to recruit several musicians in its quest to recreate the music of the act(s) their honoring.

What We Do In The Dark, the hilarious film that brought vampires and werewolves into the realm of mundane reality television, is coming to TV as a half-hour show on FX. Jermaine Clement and Taika Waititi are adapting their film, but according to a roundup TV shows in the Chicago Tribune, they are not performing in the small screen version.

The original lineup of Chicago power pop band Off Broadway will celebrate the 40th Anniversary of its still vital debut album On at Reggie’s Rock Club on February 23. Singer-guitarist Phil Angotti, another veteran of Chicago’s power pop elite and founding member of The Idea, will perform with his current band. The Evictions are also on the bill. Reggie’s Rock Club is located on State Street just south of downtown.

Congratulations to Alexis Gaw, Anonda Tyler, and Luna MacWilliams on having their plays chosen as winners of Pegasus Theatre’s 32nd Young Playwrights Festival. As noted by Web Behrens in the Chicago Tribune, Pegasus will give each winning entry a professional production that will be staged at Chicago Dramatists at 773 N. Aberdeen. The plays will run on weekends through January 27.

Big Brother’s Vinyl, a local guitar-driven band that covers classic rock hits as well some unexpected deep cuts and rarities, will perform at Mac’s On Slade in Palatine on Sunday, January 20. The show starts at 5:00 p.m.
Posted by Terry Flamm at 9:54 PM