And Everywhere There Was Song And Celebration 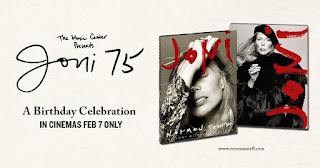 Joni Mitchell has been making a steady recovery since suffering an aneurysm in 2015. Certainly, the music she created—from gorgeous folk to adventurous jazz—remains as vital and influential as ever. On February 7, her fans can watch an all-star tribute concert that was filmed last November at the Dorothy Chandler Pavilion in Los Angeles. Joni 75: A Birthday Celebration will play for that one night only in movie theaters throughout Canada and the United States.

In related news, a collection of Joni Mitchell photographs taken over several years by Rowland Scherman, Patrick Harbron, Jay Blakesberg, Norman Seeff, Joel Bernstein, Graham Nash, Guido Harari, Henry Diltz, David Gahr, and Ken Regan will be featured in an exhibit at LeeAnn Brook Fine Art in Nevada City, CA, in collaboration with the Morrison Hotel Gallery. The opening reception this Friday from 5:00 p.m. to 7:00 p.m. will include Diltz and Bernstein as special guests. The exhibit runs through February 28.