All The Wine - Summer Parade 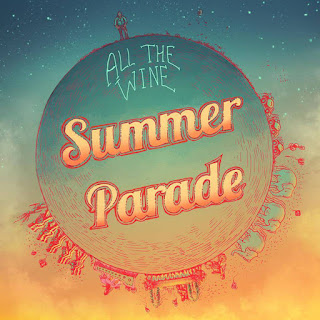 The Chicago-based indie rock trio All The Wine released their debut Summer Parade in 2014, a year after they had formed. The EP’s pleasant title stands in direct opposition to vocalist-guitarist Danny Cozzi’s tales of relationships breaking apart at the seams. Cozzi’s knack for compelling lyrics, along with the energetic instrumentation he creates with drummer Matt Scott and bassist Danny Stankus keeps these four songs from becoming too maudlin.

There’s a running theme throughout Summer Parade about couples envisioning California as a paradise but splitting before they can attain it. “I should have known you’d go away,” Cozzi sings on “Faith,” the dark but enticing first track. “Cause I’m not enough for anyone I know.” On the heavier “Landlocked” he notes, “You’re dressed like you’re leaving tonight” and adds,“What would do without my love to hold you up?” The beguiling “Denver” showcases the way All The Wine crafts elaborate arrangements that shift through various tempos.

The fast-paced “I’m Tired, I’m Wasted, I Love You, Darling!” sounds like the name of a movie or theatre farce, but it evokes the way Bruce Springsteen portrays relationships that have lost their spark. “We were gonna take to the streets and run to California/I was gonna marry you and never let you down,” Cozzi recalls before conceding, “Looking back, we could have done a few things better.” After some rousing musicianship, “I’m Tired, I’m Wasted, I Love You, Darling!,” as well Summer Parade ends with the heartbreaking question, “How will we get to California now?”

Cozzi has an acoustic show coming up at Mutiny in Logan Square on July 11 and there will be a full-band show at Silvie’s Lounge on July 17. All The Wine’s second EP Heavy Lights is due out later this year.
Posted by Terry Flamm at 8:01 PM

I love this EP!! All The Wine is talent on the rise!! Great job guys!!