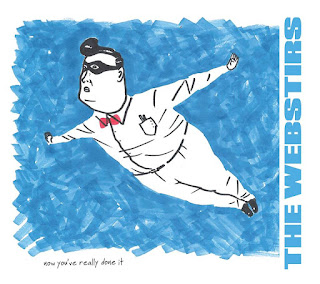 If the term quirky had never been used to describe a pop band before, it would have to start with The Webstirs. These Chicago-based power pop veterans have always been more likely to sing about the mysterious disappearance of some guy named Maurice Klybatzia than contemplate the joys and sorrows of relationships. They’re masters of clever wordplay who wrap their observations within catchy melodies. Now You’ve Really Done It is their fifth and most consistent release.

“Saving The World,” an energetic fable augmented by a horn section, describes drinking, buying guns, and tangling with the sons of a warlord. The gritty “Haymarket Riot” provides a history of Chicago’s political uprisings, and asks, “Who is left for you to trust?/When the monument has turned to dust.” On “Farther You Can Fall,” The Webstirs craft an indelible melody behind the sobering thought that no matter how bad things may look, they’re bound to get worse. “Ghosts” is a blistering satire on the music business (“They took some pride in it before it fell apart”) while “Bright Sunshine” evokes The Rolling Stones in its hard-edged depiction of trying to succeed in Hollywood. Amidst all this turmoil, The Webstirs serve up the joyful romance of “Mystery Spot.” Now that’s what you call being quirky.
Posted by Terry Flamm at 1:14 PM