Two Shots Of Whiskey On Friday 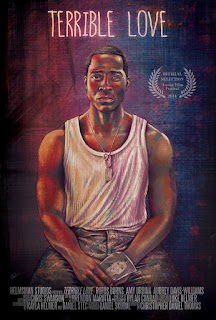 (All films listed for tomorrow are from the USA unless otherwise noted.)

The Blue Whiskey Independent Film Festival will offer an extra feature film at Cutting Hall in Palatine tomorrow, in the form of the 4:00 PM screening of director Nick Cavalier’s 97-minute documentary Forced Perspective. Critically acclaimed Cleveland-based artist Derek Hess is the subject of this hard-edged study of a gifted man’s struggle against alcoholism and bipolar disorder. Cavalier also explores the positive impact Hess has had on other artists and the art scene. Admission is $8.00.

Later tomorrow, Blue Whiskey will present the Midwest Premiere of Terrible Love, a drama from director Christopher Thomas about an Iraq war veteran determined to keep Post Traumatic Stress Syndrome from destroying his marriage. Terrible Love, which was the Audience Award Winner at the 2014 Austin Film Festival, will be preceded by four short films. Admission is $10,

Fixed is a seven-minute comedy from Australia about a little girl who wants her dog to have puppies; Yikes is an 11-minute comedy about an actor who is suddenly able to see into the immediate future. The 14-minute drama A Game On The Line concerns a former high school football star who needs to prove he’s capable of providing for his family; and Lay In Wait is a 26-minute drama about a married woman who loses her wedding ring during an affair, and desperately wants to find it.

The Blue Whiskey Independent Film Festival continues through the weekend, with afternoon and evening features on Saturday, and the Blue Whiskey Awards Ceremony and Chaser on Sunday.
Posted by Terry Flamm at 10:11 PM