Going To Bat For Disadvantaged Kids 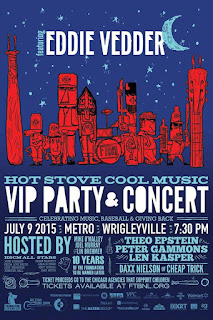 There may be no crying in baseball but there will be a lot of rocking connected with the sport tomorrow night when the  Hot Stove VIP Party And Concert returns to Metro in Chicago’s Wrigleyville neighborhood. Presented by The Foundation To Be Named Later, the annual event raises funds by bringing together several musicians under the HSCM All Stars banner. Pearl Jam frontman and Cubs fanatic Eddie Vedder was a last-minute addition to a lineup that also includes Jimmy Chamberlin from Smashing Pumpkins; Freda Love Smith from The Blake Babies; John Stirratt from Wilco; Jason Narducy from Split Single; Max Spiegel and Curt Morrison from Tributosaurus, and Cheap Trick drummer/Rick Nielsen offspring Daxx Nielsen.

Current President of Baseball Operations for the Chicago Cubs Theo Epstein and his brother Paul created The Foundation To Be Named Later 10 years ago when they were still based in Boston. Theo will be on hand for the HSCM festivities tomorrow night, along with Cubs broadcaster/musician Len Kasper, and noted sportswriter Peter Gammons. WXRT morning man Lin Brehmer will share hosting duties with Mike O’Malley and Joel Murray. Tickets for The Hot Stove Cool Music VIP Party are now sold out, but anyone interested in helping The Foundation To Be Named Later in its work can contact the organization through the official website. Len Kasper does a short bit called Len And Lin on Brehmer’s show every Monday and Friday throughout the baseball season, so it’s a safe bet they’ll have a lot to say about this concert/fundraiser on the morning after.
Posted by Terry Flamm at 11:10 PM