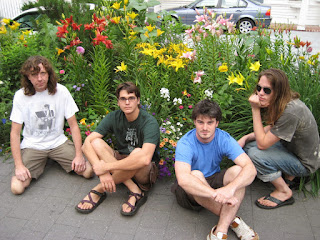 With Fare Thee Well and all its related activities going on in Chicago this weekend, Deadheads could justifiably proclaim, as Wavy Gravy did at Woodstock, “We must be in heaven, man!” Although if that were literally true, Jerry Garcia would be in their midst, greeting everyone with a benevolent smile. It’s definitely a time for the tie-dyed crowd to snap up t-shirts, caps, and an amazing variety of mementos that are available online and at retail outlets. Here’s an item that flies a bit under the radar.

The Northampton, MA prog rock band The Seventh Ring Of Saturn has provided a way to simultaneously celebrate The Grateful Dead’s 50th Anniversary and A Summer Of The Hollies In Chicago with its new seven-inch single. Pressed on white glow-in-the-dark vinyl, one side has The Seventh Ring Of Saturn covering Jerry Garcia and Robert Hunter’s “Mountains On The Moon” from the Grateful Dead’s groundbreaking 1968 Aoxomoxoa album, while the other side has their hypnotic rendition of a Hollies rarity from the Graham Nash era called “All The World Is Love.”

“Mountains On The Moon” has a sparse arrangement similar to the original, but The Seventh Ring Of Saturn takes a more electric approach, with intricately layered vocals and a touch of sitar. “All The World Is Love” previously appeared on the Re-Evolution FDM Sings The Hollies tribute album put out by the UK indie label Fruits de Mer in 2013. It was one of my favorite tracks on a collection where current artists took risks with classic pop songs and succeeded. (See my two-part review, March 6 and 7, 2013.)

The Seventh Ring Of Saturn’s second album Ormythology, was released earlier this year, and featured classic neo-psychedelic songs like “Burning A Hole” and “Face.” See my April 16th, 2015 post for a full review.
Posted by Terry Flamm at 9:57 PM