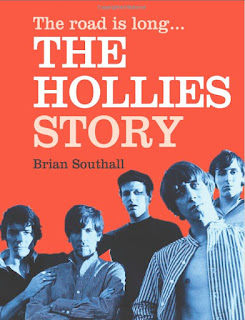 Happy 4th Of July Weekend!
It’s going to be a tie-dyed 4th Of July this year in Chicago, with the three-day Fare Thee Well event taking place at Soldier Field. There are a number of Grateful Dead-related festivities going on around the city, so Deadheads should check out the local papers as well as radio station WXRT’s website for info about screenings, parties, and special programs being offered over the weekend. WXRT will replay the Fare Thee Well concert for each day at midnight.

Grateful Dead fans might also run into Chicago-based artist Kelsey Skutnick selling copies of her 18 x 24 Grateful Dead 50 print for on the near Soldier Field.

When I declared this to be A Summer Of The Hollies last week, I had no idea that a new book would play a prominent role. The road is long: THE HOLLIES STORY, by Brian Southall, is now available on Amazon in paperback and Kindle form. Southall is no stranger to writing about rock and roll’s biggest stars, having authored or co-authored books about The Beatles, Pink Floyd, Jimi Hendrix, and The Bee Gees. Various Facebook pages associated with The Hollies have been buzzing about THE HOLLIES STORY, and they all seem to be happy with it.

This past Monday I did a post stating that The New Invaders show at Lake Ellyn Park in Glen Ellyn could qualify as an official A Summer Of The Hollies event because the local copy band has been known to perform Hollies tunes at their shows. Guitarist-vocalist Jimmy Herter informed me via a recent email that The New Invaders will be playing some Hollies songs at its 4th Of July concert this Saturday from 1:00 to 2:30 PM.

The 2015 Hometown Fest in Palatine is underway, with 17 bands scheduled to perform over the 4th of July weekend. Serendipity, a band comprised of five young women who play originals and an eclectic selection of covers, perform today at 5:00 PM, and Hot Rocks will paying tribute to The Rolling Stones  on Sunday at 5:30 PM.

Weezer, with supporting act St. Motel, will be the first of five major live performances scheduled to take place at the Petrillo Music Shell when Taste Of Chicago begins next Wednesday in Grant Park. The other acts are Erykah Badu on July 9; The Chieftans, Paddy Maloney, and Special Consensus on July 10; the XRT sponsored Spoon, Houndmouth, and Madisen Ward and The Mama Bear on July 11; and Maze featuring Frankie Beverly on July 12.

Chicago Tribune film critic Michael Phillips recently lamented the failure of the Brian Wilson bio-pic Love And Mercy to compete with blockbusters like Jurassic World and Inside Out at the box office. A great way to remedy that problem would be to see Love And Mercy and catch Brian Wilson live at Ravinia this Monday, July 6. He’ll be performing with fellow Beach Boy Al Jardine and Blondie Chaplin. Rodriguez, the subject of another critically acclaimed documentary, Searching For Sugar Man, will also be on the bill that night.

A belated happy birthday to Deborah Harry who celebrated a day after the occasion by performing in concert with Blondie at Ravinia on July 2nd.

The Smithereens will be serving up classic power pop when they perform next Saturday, July 11 around 7:00 PM on the Main Stage at Roscoe Village Burger Fest on Belmont between Damen and Oakley. The Handcuffs and The Fabulous Thunderbirds are also playing that day. Catfight is among the bands slated to perform on Sunday.

The very first Artfest Michigan Avenue takes place next Friday through Sunday just outside the Chicago Tribune building, overlooking the Chicago River. Over 100 juried artists will be displaying their work, and admission is free.

Whitewolfsonicprincess has a gig at Club Lucky next Sunday, July 12 as part of the Bucktown Garden Walk. Waning Faith; Brooke Bartlett & The Blue Lines; Matthew Morgan and The Family Band; and Kurt Michaels Continuum featuring Alain Quinn will also be performing. The event is sponsored by Chicago Acoustic Underground and Club Lucky.

Guitar-driven power pop band The Bishops’s Daredevil Stunt Club has a record release show for their full-length album Rock N Roll Motorcycle Dinosaur at the Bottom Lounge July 18th. I’ll be reviewing their 12-song effort in the near future.

Even though Chrissie Hynde never responded to my invitation for her to bring a few chapters of her memoir to my writers group for a critique, I still have to plug Reckless - My Life As A Pretender now that it’s available for pre-order from Penguin Random House. This is destined to be one of the most fascinating rock and roll books of the year. Hopefully, there will be a book-signing tour.

Singer-guitarist Danny Cozzi of the local indie rock trio All The Wine has an acoustic show coming up at Mutiny in Logan Square on July 11, and there will be a full-band show at Silvie’s Lounge on July 17. See this past Wednesday’s post for my review of All The Wine’s Summer Parade EP.

The 6th Annual Blue Whiskey Independent Film Festival will run July 19–26, with events scheduled at the Cinema Star Grill in Arlington Heights and Cutting Hall in Palatine. The film festival usually takes part in Palatine’s 4th of July parade and hands out schedules to people in the crowd.
Posted by Terry Flamm at 3:42 PM