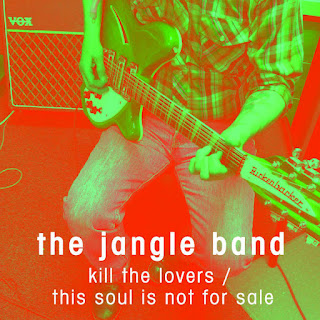 Australian power pop musician Joe Algeri has worked on a variety of projects in recent years, including his solo work under the name The JAC and being part of the international trio The Britannicas. As a musician and producer, he draws heavily on 1960s pop arrangements and frequently takes an off-kilter view of love and life in general. The Jangle Band is a brand new outfit that features Algeri teaming up with Jeff Baker and Ian Freeman, who are veterans of 1980s Australian bands like The Palisades, Mars Bastards, The Rainyard, and Header.

The trio recruited an additional three musicians as the recording proceeded, and the result is a two-song, download-only single that’s available at no charge on Algeri’s Bandcamp page. On “Kill The Lovers,” which he wrote, Algeri sets the idea of swapping a fading romance for a new platonic relationship to jangling guitars (hence the band name) and a catchy mid-tempo arrangement that recalls “Rain” era Beatles. Like much of Algeri’s previous work, the song offers lush, harmony vocals.

“This Soul Is Not For Sale” is a new composition from Baker and Freeman that adroitly taps into the harmonies and Rickenbacker guitars immortalized by The Byrds. Well-crafted lines like, “I may be weary/This cup of fire drained/But I will never fade away/If this light alone remains” encourage fighting for what you believe in, although the actual crisis taking place in the song is open to interpretation. All in all, The Jangle Band earns its name on both of these tracks.