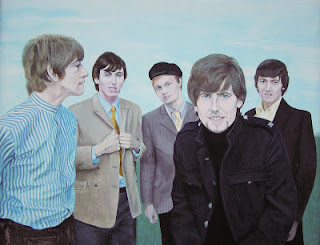 The best souvenirs come from someone special.
My wife Pam painted this Hollies portrait for me when we first started dating.

At the risk of seeming clueless, I’m officially designating the next few months as A Hollies Summer In Chicago. I know. The Rolling Stones just played SummerFest in Milwaukee, which is a pretty quick drive from here. U2 is in town for a series of five concerts at the United Center, starting tonight. The Grateful Dead will play their last three concerts ever at Soldier Field over the 4th of July weekend. Paul McCartney is coming to Lollapalooza in August. Tomorrow is Global Beatles Day. Which is why I’m saying A Hollies Summer, so that it doesn’t prevent June, July, and August from being some other artist or event’s Summer as well. Still, The Hollies?

Two members of that Rock And Roll Hall Of Fame-inducted band are coming to the Chicago area for separate performances in July and August. I can’t remember the last time something like this has happened. Graham Nash will be doing a solo gig at The Arcada in St. Charles on July 28, which is close enough to July 25 to be considered part of my birthday celebration. Terry Sylvester will once again be a guest at Fest For Beatles Fans, when it returns to the Hyatt Regency in Rosemont on the weekend of August 14–16. In a way, the fact that Sylvester’s arrival here follows Nash’s recreates a major point in Hollies history; when Sylvester replaced Nash as the band’s rhythm guitarist-vocalist.

Although Nash seemed to shun his work with The Hollies when he first joined David Crosby and Stephen Stills, later years have seen him embrace his Manchester roots. His sense of pride in the work he did with The Hollies clearly comes across in Nash’s autobiography Wild Tales: A Rock And Roll Life.  When I did a telephone interview with him for the Illinois Entertainer in 2009, (see Broken Hearted Toy archives, December 17, 2009) he was adamant that The Hollies belonged in The Rock And Roll Hall Of Fame. A year later, he would get his wish. So there’s reason to believe a Nash solo show will find him performing some Hollies material.

The last time Terry Sylvester was a guest at Fest For Beatles Fans - Chicago, he was interviewed by The Fest’s MC Terri Hemmert in the Main Ballroom, signed autographs, and performed a few Hollies songs with the tribute band Liverpool. More recently, Sylvester was part of The British Invasion Tour that also included Chad And Jeremy, Peter Asher, Denny Laine, Mike Pender, and Billy J. Kramer. (See Broken Hearted Toy archives, March 9, 2015.) He exudes a one-of-the-guys-at-the-pub friendliness, and seemed happy to accept the Broken Hearted Toy button I gave him at City Winery - Chicago.

Another appropriate way to celebrate A Hollies Summer In Chicago would be to play their songs at home and on your assorted devices. If you don’t own a Hollies album, there are several hundred greatest hits packages available. Nash released a boxed set called Reflections that covers his entire career. The Look Through Any Window 1963 –1975 DVD has TV footage, live performances, interviews, and amazing footage of The Hollies in the Abbey Road recording studio.

Local bands like The Abbeys and The Webstirs that specialize in catchy songs with harmonies could include a Hollies cover in their live sets. Singer-guitarist Phil Angotti could get together with Casey McDonough, Tommi Zender, and the boys and do a Hollies tribute show. (They’ve covered The Bee Gees, The Zombies, and The Kinks very well so far.) The Hollies Appreciation Facebook Area Page is a great place to see rare photos and videos, but you need permission to join. The Hollies official website has tour books, t-shirts, a mouse pad (I’m using mine now) and other merchandise for sale. You can find an amazing variety of vintage Hollies videos on YouTube. So, there are lots of ways to celebrate A Hollies Summer. Let the fun begin.
Posted by Terry Flamm at 9:42 PM