The Fad - The Now Sound 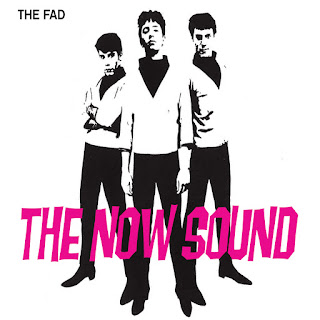 Back in 1982, The Fad dressed in Star Trek-inspired outfits and embarked on a three-year mission to boldly combine the sound of the original British Invasion with an upcoming genre called power pop. Reportedly, the Philadelphia-based trio’s debut EP was marred by a producer who inexplicably sped up the vocals to an annoying extreme. The Now Sound, recently released on Kool Kat Musik, goes back to the original recordings for that effort, and adds other songs that were done by The Fad during their 1982-85 heyday.

“Lark City” and “Fad Twist,” a pair of instrumentals, along with the title track, “The Swing’s The Thing” and “Fad Theme,” are pure fun in a 1960s Carnaby Street vein. In fact, I initially misread the press release and thought these guys were contemporaries of The Kinks and The Who. The first few listens did nothing to discourage that impression. The catchy, guitar-driven “Where The Colors Are,” “Genie,” and “Countdown” bring in the power pop element, with an emphasis on harmonies and clever lyrics.

On “Broken Hearts,” The Fad incorporate breezy 60s “bop ba ba” vocals into a more modern, new wave arrangement. “I Don’t Like Jets” also has a bit of an edge, and would make a nice segue from The Three O’Clock’s “Jet Fighter” on a power pop playlist. After his work with The Fads, singer-guitarist and chief songwriter Frank Max would go on to form The Beat Rats.
Posted by Terry Flamm at 9:36 PM