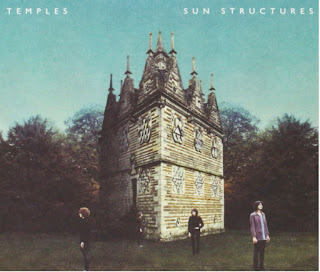 The Manchester band Temples, of “Shelter Song” fame, are the headline act at Do-Division Fest  this Sunday night. Several indie rock acts will be on hand as the festival runs from Friday, May 29th to Sunday, May 31st.

Outdoor art show season has arrived, and there’s a good one taking place this weekend at Michigan Avenue and Lake Street. The Millennium Art Festival isn’t the biggest of Chicago’s annual art events, but it always has an intriguing and eclectic selection of work. Admission is free.

Alan Parsons has a gig at The Arcada in St. Charles Friday, May 29th. On the following  night, Peter Noone’s Herman’s Hermits will be performing at the same venue. Both shows are very close to being sold out.

The Blisters, The Evening Attraction, and The Forest Fires will help The Throne Room at 2831 N. Broadway celebrate its 1 Year Anniversary Friday, May 29th. Show time is 9:00 PM.

Noel Gallagher’s High Flying Birds will likely be playing songs from their new Chasing Yesterday CD at their concert Saturday, May 29th, at the Riviera Theatre in Uptown. They have a show the next night at the Pabst Theatre in Milwaukee.

Playwrights Beth Graham and Daniela Vlaskalic will be at Signal Ensemble Theatre this Saturday night for a “talkback and meet and greet” following the staging of their Jeff Recommended work The Drowning Girls.

Christie’s Dairy Delights in Palatine will celebrate its 1 Year Anniversary with a DJ and special deals this Saturday, May 30th, from 6 to 10 PM.

Also in Palatine, Music On Stage will be presenting Damn Yankees at Cutting Hall from May 30th through June 14th.

Saturday, May 30th will be the last day for the Vintage Music Poster Show at Curly Tale Fine Art Gallery  at 16 W. Erie. The exhibit includes a framed ticket from a Cream concert, a Janis Joplin poster for her appearance at the Auditorium Theatre, and a Beatles poster from Japan. Admission is free.

The 2nd Annual Chicago Nightlife Awards, co-hosted by MTV’s Jesse Camp and Jeremy Scheuch from Do312, will take place this coming Tuesday, June 2nd at Concord Music Hall. Categories include Band of the Year, Best Live Music Venue, Best Festival, Best DJ, Blogger Of The Year, Photographer of the Year, and Nightclub of the Year.

Whitewolfsonicprincess, an alt rock band led by Carla Hayden and James Moeller from the Black Forest theatre group; The Rut, an alt rock band offshoot of the Famous In The Future sketch comedy group, and Citizen’s Relief, an off-kilter theatre duo will be part of a variety show that also includes the alt rock band Gunnelpumpers, comedian Elizabeth Gomez, and The Revelettes Go-Go Dancers this Sunday afternoon, May 31st at Red Line Tap. Black Forest, Famous In The Future (whom I used to perform with) and Citizen’s Relief are veterans of the annual Abbie Hoffman Died For Our Sins Festival.

Mary-Arrchie Theatre has announced that this year’s Abbie Hoffman Died For Our Sins Festival will run the weekend of August 14 – 16. Artistic Director Rich Cotovsky will once again channel Hoffman’s spirit throughout the event, and somewhere around 60 acts, performing drama, comedy, performance art, and music, will be involved. It’s going to be a weekend of tough choices because that’s also when Fest For Beatles Fans - Chicago and the Chicago Air And Water Show take place.

Continuing the Mary-Arrchie theme, Carlo Lorenzo Garcia, a longtime director and actor with the company, has been writing and performing in a new Internet comedy series called Under Covers that’s a spoof of hardboiled detective shows. Cotovsky was a recent guest star.

Graham Parker And The Rumour have a 4:00 PM gig at City Winery Chicago on Sunday, June 7th, and an evening show on Monday, June 8th.

Death and Memphis, a guitar driven punk/rock and roll quartet that includes guitarist Steve Gerlach of Bad Examples, Tomorrow The Moon, and Sons of the Silent Age, has an EP release party coming up next Friday, June 5th at Liar’s Club in Chicago.

Another Kind Of Love: A Punk Rock Play, InFusion’s staging of Crystal Skillman’s study of a doomed female rock star, continues it run at Chopin Theatre through June 14th. Admission is $28.

It’s been a while since I’ve visited a piano bar, so I can’t really say what sort of music patrons should expect in such a venue. But I liked the variety Stan Karcz was offering at the Seasons 52 restaurant in Schaumburg this past Monday night. There were songs by Squeeze and Green Day along with the standards by Frank Sinatra and Tony Bennett. His playlist includes Gotye, Ray Charles, Patsy Cline, Blondie, Sam Cooke, and 4 Non Blondes. Karcz will be back at Seasons 52 in Schaumburg Monday, June 1st and Friday, June 5th. You can find his full schedule, as well as info about his original music, on his website.

That CD The Neverly Brothers have been promising is now available. The trio has developed a loyal following across the Chicago area with a show that traces the history of rock from its earliest days through the mid-1960s. A Magical History Tour, which captures that experience, will be available separately as Volume 1 and Volume 2 or as a set. As of now, the CDs are only being sold at The Neverly Brothers’ concerts.
Posted by Terry Flamm at 9:45 PM