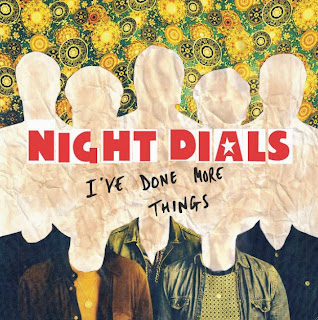 This very first release from Night Dials is a double A Side single that showcases the London based quintet’s obsession with recreating the bare-bones recording techniques favored by English bands in the early 1960s. From there, they add a more modern edge, particularly with energetic guitar playing. The songs are credited to a gentleman named Ilan Hartogh, but other than that, you won’t find much information about the members of The Night Dials on their own site or their record label’s.

The stronger track, “I’ve Done More Things,” concerns a guy boasting superiority over his girlfriend’s new beau, even as he comes to realize his own relationship with her is doomed. The catchy arrangement, with its infectious drumbeat and emotive vocals, makes this song sound like it could gave sprung from an early LP by The Kinks. The melodic “I’ll Sleep When I Die” starts out ornate and simple with echoing vocals before morphing into a guitar-driven garage rock tune that would have been perfect to dance to in a 1960s swinging discotheque.
Posted by Terry Flamm at 3:58 PM