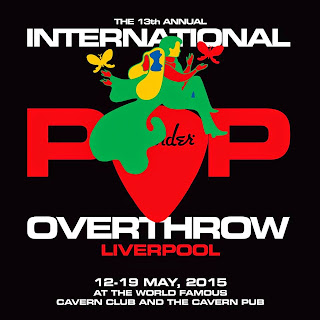 International Pop Overthrow, the globe-trotting celebration of power pop and indie rock, kicks off an extended run in Liverpool tomorrow at The Cavern Club. A few years back, IPO CEO/Founder David Bash told me in an interview for the Illinois Entertainer that the allure of playing at the world-famous Cavern Club (although it’s not the original one) allows him to pick the cream of the crop for his Liverpool showcases. The festival runs through May19th with well over 100 acts scheduled to appear. There will be a Cavern Club Tribute to Lennon and McCartney on Friday afternoon.

Once again, there are a few Yanks who make the trip across the sea, including Lannie Flowers, Jeremy, and Dave Rave, who were all at IPO-Chicago (though they’re not Chicagoans) this past April. Bands also arrive from other countries in Europe. The schedule, which can be found on the International Pop Overthrow website, has links to all the acts. That makes it a great resource for discovering new music even for those who can’t make it to The Cavern Club. Sometimes I put on a beret and pretend I’m David Bash while I research the bands. Fancy playing along?

Pacific Soul Ltd. mixes The Beach Boys with 1970s soul music. SheBeat is an acoustic pop singer-songwriter. Alice (from Alice And The Lovers) formed an “original girllllstar band” on Valentine’s Day in 2013 that plays guitar-driven rock not unlike Dum Dum Girls. She’ll be doing a solo gig at IPO. The Rejetnicks, from Munich, describe their sound as Garagedancebeat and claim The Kinks and The Sonics as influences. Thee Wylde Fuzz Show mixes garage and psychedelic rock. The Backlash comes from Milan, and describes its sound as Britpop/shoesgaze music. Autos Detroit is a powerpop band from Madrid whose latest release has songs called “Jeff Lynne” and “Big Star.” That’s just a small sample of the bands that will be playing at The Cavern Club this week.
Posted by Terry Flamm at 8:55 PM