Fest For Beatles Fans - Chicago And A Hollies Type Of Summer 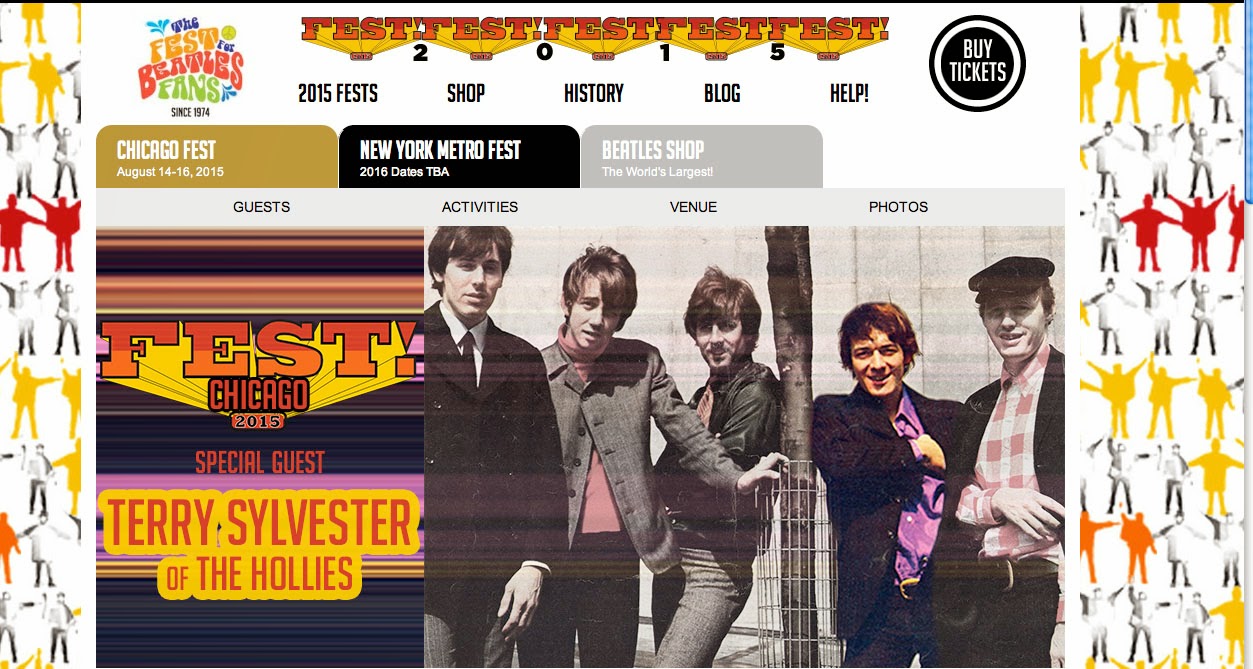 Great graphic from The Fest For Beatles Fans website. But none of these guys is Terry Sylvester.

Tickets for Graham Nash’s solo show at The Arcada in St. Charles on July 28th went on sale today. My incredible wife Pam snagged two tickets, so we’ll be going to celebrate my birthday, which occurs three days earlier.

And now on to this year’s Fest For Beatles Fans - Chicago, which also involves a former member of The Hollies. Now if only the current lineup of The Hollies, which includes original members guitarist-vocalist Tony Hicks and drummer Bobby Elliott, would pay the Chicago area a visit, this could really be a summer for Hollies fans to remember.

Last Sunday, on her Breakfast With The Beatles show on WXRT, Terri Hemmert announced the guests for this year’s Fest For Beatles Fans - Chicago. The information can also be found on the Fest’s official website. Hemmert will once again serve as Master Of Ceremonies as Fest For Beatles Fans takes place at the Hyatt Regency O’Hara in suburban Rosemont on the weekend of August 14 – 16th. This year, it’s not on the same weekend as Wizard World Comic Con - Chicago, which is held at the neighboring Donald E. Stephens Center. That makes it easier for those of us who like to attend both events, but the crossover of Beatlemaniacs and sci-fi nerds has been fun and fascinating in the past.

Fest For Beatles Fans - Chicago will once again present musicians, authors, artists, photographers, and music biz people who have some connection to The Beatles. Most are accessible to fans in both the general sense of watching them being interviewed in a large meeting room, and on a face-to-face basis at the autograph tables. Bob Eubanks, who produced Beatles concerts before hosting The Dating Game, and Jack Oliver, former president of Apple Records, are among this year’s guests. A huge marketplace with loads of music-related memorabilia is also a major draw.

Singer-guitarist Terry Sylvester, who replaced Graham Nash in The Hollies, will make his second visit to the Fest For Beatles Fans - Chicago. He’s actually not in the Hollies photograph Fest For Beatles Fans is using on its website. Earlier this year, Sylvester was part of the British Invasion Tour that also featured Fest For Beatles Fans veterans Peter Asher, Denny Laine, Billy J. Kramer, and Chad and Jeremy. Sax player-vocalist Mark Riviera, who has toured with Ringo Starr and made an impressive Fest debut last year, is back again. Louise Harrison, George’s older sister, will also be on hand.

Some of the returning favorites include trivia master Wally Podrazik; producer-musician Mark Hudson, who has worked with Ringo Starr and other famous musicians; Beatles artist Eric Cash; Rob Shanahan, who served as Ringo Starr’s photographer; and authors Bruce Spizer, Jude Southerland Kessler and Dee Elias. Liverpool, one of the best Beatles tribute bands around, will continue its tradition of performing at Fest For Beatles Fans - Chicago, and Peter Max designed a colorful and imaginative poster that will be available for sale.

The Fest For Beatles Fans - Chicago website promises that additional guests will be announced soon. Tickets are $46.00 for Friday; $65.00 for Saturday or Sunday; and $169.00 for the entire weekend. I’m planning on doing a more extensive preview closer to the event.
Posted by Terry Flamm at 8:11 PM