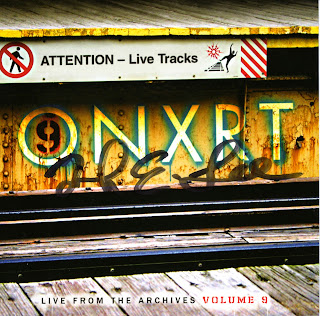 Frank E. Lee’s 1–5 PM shift tomorrow will be his last for WXRT as he enters into retirement. Having listened to Lee for decades, I want to thank him for making weekday afternoons entertaining, and wish him the very best. Like so many WXRT air personalities, his easy-going delivery made it feel like he was a friend. Lee recently posted a video tour of the station’s new headquarters in the Prudential 2 building on the 93XRT Facebook page that serves as a bookend to a video tour he once gave of WXRT’s previous location at 4949 W. Belmont. It should be interesting to see what other treats Lee and his fellow air personalities cook up for his swan song tomorrow.

Back in 2006, when WXRT was selling Volume 9 of its ONXRT - Live From The Archives CD through Borders Books and Music, I went to the Schaumburg location to buy a copy. I had worked at that Borders for two years and knew that Frank E. Lee would be signing copies there. He and marketing person Kristin Kay were genuinely friendly, and I told him that Borders would do a good job selling the CD since its music staff was so knowledgeable and helpful. I had been part of that staff, and all modesty aside, my ability to help customers find CDs was legendary.

I enjoyed talking to Lee again at one of WXRT’s Listener Poll Galas, and as a former southwest sider, I have fond memories of his New Wave nights at Eric The Red’s on 111th Street. But it may be best to think of Lee’s retirement in terms of those now-shuttered Borders locations. It’s rare to find a record store these days where an employee will not only take the time to help you with what you’re looking for but also suggest other music you might like. In an era of listening to downloaded tunes on various devices, it’s important to keep in mind the dee jays who have introduced us to so many rock and roll artists over the years. Frank E. Lee is one of the best, and he always works with a smile.
Posted by Terry Flamm at 4:32 PM