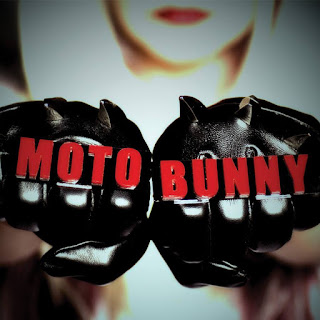 Motobunny is a new group comprised of members from two veteran and highly regarded garage rock acts that often toured together but had never joined forces before this self-titled debut. Vocalist Christa Collins and bassist-vocalist Rik Collins come from The Woolly Bandits while vocalist-keyboards player Nicole Laurenne, guitarist Michael Johnny Walker, and drummer Jay Lien are members of The Love Me Nots. Together they’ve forged a dozen high-energy songs that tap into garage and glam rock, with Christa Collins and Nicole Laurenne consistently working in tandem on vocals.

“Let’s Go Out,” with its ultra catchy mix of keyboards and guitar, could serve as a response to “This Beat Goes On/”Switching To Glide” by The Kings as Nicole Laurenne and Christa Collins extol the joys of a night on the town and toss in just a snippet of rap singing. The title track is a rapid-fire tale of a woman careening about on a motorcycle, while “Apocalypse Twist” makes the end of the world seem fun with an arrangement that sounds like The B-52’s, only more muscular. The vocal interplay on “Red Rover” is particularly impressive, and sassy on the Halloween fun of “My Boyfriend Is A Ghost” and “Spider And Fly.”

Rik Collins, who performed with The Seeds, provides some snakey bass playing on “Drown” and propels the hard-hitting opening track “The Other Side.” Walker provides plenty of guitar firepower throughout, and complements Lien’s drumming for a funky approach on the anthem “Shake Me.” It’s a safe bet that anyone encountering these musicians for the first time will want to explore what else they’ve recorded.
Posted by Terry Flamm at 4:02 PM