Shapes Of Things To Come 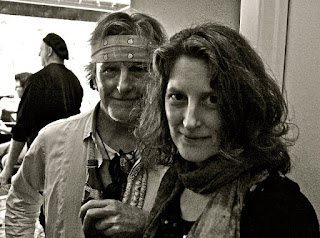 People in Chicago may have had a hard time getting into a summer frame of mind last weekend due to the unseasonably cold weather, but at least two events offered an encouraging taste of the rewards the next three months have in store. The Millennium Art Festival, at Michigan and Lake Street, is one of the first of the outdoor art shows that spring up around town each year. It was at full force Sunday after a persistent rain had caused many of the exhibitors to close up their tents on Saturday.

Despite the temperature hovering just below 50 degrees, creative types like pop-pointillist Tim McWilliams, photographer Igor Menaker, and new media artist Barry Reithmeier were showcasing impressive work. The warmly dressed folk/psych duo Patchouli was performing intricate and melodic songs on a small stage, with only a few people hearty enough to sit and watch them. In the coming weeks, the Old Town, Wells Street, and Gold Coast art fairs will be held in Chicago. Hopefully, the weather will be bearable by then.

It was a quick ride on the CTA from downtown to the north side where the alt rock band Whitewolfsonicprincess was hosting a decidedly offbeat variety show at The Red Line Tap. Looking at the lineup, I couldn’t help being reminded of Mary-Arrchie Theatre’s annual Abbie Hoffman Died For Our Sins festival. Whitewolfsonicprincess, a musical offshoot of the Black Forest theatre group; The Rut, featuring current and former members of the Famous In The Future comedy group; and the avant garde theatre duo Citizens’ Relief, are all veterans of Abbie Fest. And they were joined last Sunday at The Red Line Tap by a comedian, a performance artist, an alt rock band, and go-go dancers.

Sunday Afternoon At The Tap, the second installment in what Moeller said he hoped would become an ongoing series, had that freewheeling vibe and camaraderie that makes Abbie Fest so inviting. The Rut kicked things off with a fun cover of The Who’s “Boris The Spider” before moving on to three clever original indie rock tunes. (Full disclosure: I performed with Famous In The Future for several years.) Comedian Elizabeth Gomez drew humor from the emotional minefield of everyday life, and hit her stride with a biting comparison of happy mommies and spiritually crushed mothers. Kc Chronis roamed through the crowd distributing bananas as she spun a rambling tale of how she once mistakenly thought she had acquired paranormal powers after attending a coven with a witch from her apartment building.

Citizens’ Relief donned German folk outfits for a piece about a man’s unfortunate obsession with his vacuum cleaner. The duo’s knack for blending comic and disturbing elements once again proved fascinating. The Revelettes performed a couple sharply choreographed dance routines to old school soul music. Whitewolfsonicprincess has by now fully established itself as a separate entity from Black Forest, and offered an impressive set of new songs and material from its 10 + 1 CD. Singer Hayden and singer-guitarist Moeller took turns on lead vocals while their band kept a steady groove augmented by percussion. Unfortunately, I wasn’t able to stay for the final act, the local alt rock band Gunnelpumpers.

As Moeller noted, Sunday Afternoon At The Tap is likely to return. Abbie Hoffman Died For Our Sins returns to the Mary-Arrchie Theatre for its 27th year on the weekend of August 14–16.
Posted by Terry Flamm at 10:13 PM