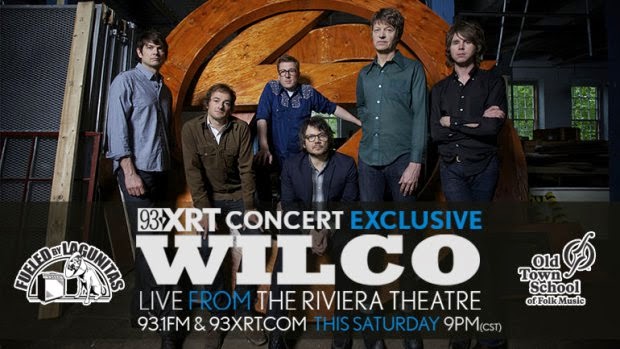 Wilco kicks off its Winterlude 2014 series of concerts at the Riviera Theatre tonight, with five more dates between now and December 12th. That’s an ambitious undertaking, and even more a amazing is that the Chicago-based band has sold out all six shows of this WXRT Holiday Concert For The Kids event. People who were lucky enough to get tickets are being asked to bring a new or like-new toy or book for the children in Chicago area hospitals. If you don’t have a ticket, WXRT will be broadcasting this Saturday night’s concert live at 9:00 PM central time on the radio and on its website. The band recently released the compilation Wilco Alpha Mike Foxtrot - Rare Tracks 1994–2014.

Two of Chicago’s more entertaining cover bands, The Beatle Bros. and EXPO ‘76 will be sharing the bill tonight at FitzGerald’s in Berwyn. The Bad Examples will be at FitzGerald’s next Friday.

Local singer-guitarist Ian Frees will be among the participants when Coffee Planet in Rolling Meadows kicks off its new series of Acoustic Night Jams this evening. Coffee Planet has also hosted poetry nights and displays the work of local artists. The acoustic jam sessions will be held on the first Friday of each month.

What the world needs now. Cracker will likely be performing “Teen Angst” and other catchy rock/Americana tunes at their Old Town School Of Folk Music gig tonight. Tickets are $30.

Get It On is presenting PowerPop Fest! tonight at the Debonair Social Club on Milwaukee Avenue. Three bands, The Typical, Peasantry, and The Viaducts, are on the bill. The music starts at 8:00 PM, admission is $10.

Chicago-based band Mutts have an LP release party for its latest effort Fuel Yer Delusion vol. 4 tomorrow, December 6th at Metro. Archie Powell And The Exports, The Kickback, and the Cincinnati band Pop Goes The Evil will also be on hand.

U2 has announced plans for a major tour dubbed iNNOCENCE + eXPERIENCE that will bring them to Chicago for two dates at the United Center on June 24th and 25th.

Ralph Covert, of Ralph’s World and The Bad Examples fame, has a CD release party tomorrow night at Schubas for his latest effort, The Accidental Soundtrack. Covert recorded it with Bad Examples mate Steve Gerlach and Michael Hartigan. He’ll be opening for Verve Pipe.

A new deluxe version of Chrissie Hynde’s impressive solo debut Stockholm is now available on iTunes, with live tracks from her recent performance at the iTunes Festival in London. It also has a new version of the holiday tune “2000 Miles.”

Hey baby, I got candy canes. Ides Of March and Survivor member Jim Peterik will be signing copies of his Through The Eyes Of A Tiger book at the Barnes And Noble at the DePaul Center on Jackson in downtown Chicago tomorrow afternoon at 2:00 PM. On December 13th, he’ll be headlining the Jim Peterik And The Ides Of March Christmas Show at the Arcada Theatre in St. Charles. Tickets for the Arcada concert are $39–$49.

The Arcada has The Robin Zander Band coming on December 20th and the 21st, and BoDeans will be performing there on December 27th. Several interesting shows have already been booked for 2015, including The B-52’s on February 12th, The Smithereens on April 3rd, Alan Parsons on May 29th, and the 50th Anniversary Tour of Peter Noone’s Herman’s Hermits on May 30th.

Let It Be - A Celebration Of The Music Of The Beatles comes to Rosemont Theatre in Rosemont, IL for two shows on February 21st.

James Moeller and Carla Hayden of the whitewolfsonicprincess alt rock band are staging their annual Rock For Tots benefit next Saturday night, December 13th, at the Red Line Tap. Along with their band, the musical entertainment includes The Darkroom Men, John Dalton, John Battles, Sameena Sultana, Hapkido All-Stars, Christina Trulio, The Telepaths (which includes Moeller and musician/journalist Pat Über-Critic McDonald), Elizabeth Gomez, The Rut. and Tina Teske and the Teskerderos. Those last two acts are offshoots of the Famous In The Future comedy group. People coming to the show are being asked to bring toys, and there will also be a raffle.

Fans who still lament the breakup of popular club/streetfest band Dot Dot Dot will be glad to know its former lead vocalist, the charismatic Adam Blair Heisler, is now fronting another big act on the Chicago scene, 7th Heaven.

Local indie rockers Fort Frances have a show next Friday at Lincoln Hall on Lincoln Avenue. The band is offering a free holiday download with its cover of John Lennon’s “Happy Xmas (War Is Over)” on its website.

Diana And The Dishes will mark their third consecutive year of headlining the annual Woman Power Holiday Show, when it takes place on Monday, December 22nd at Schubas Tavern on Chicago’s north side. This year’s evening of female-fronted bands will benefit Global Girls, a performance education organization for girls in the South Shore neighborhood. Diana And The Dishes will be backed by the six-piece soul group Everybody Say Yes, and Birdie Wing, a duo comprised of singer-songwriter Lara Filip and keyboards player Shannon Greene Robb, will be the opening act. Admission is $15, the music starts at 8:00 PM.

The December issue of the Illinois Entertainer is out and it has my reviews of new releases by The Buzzcocks, The Bangles, and The Safes.
Posted by Terry Flamm at 5:23 PM