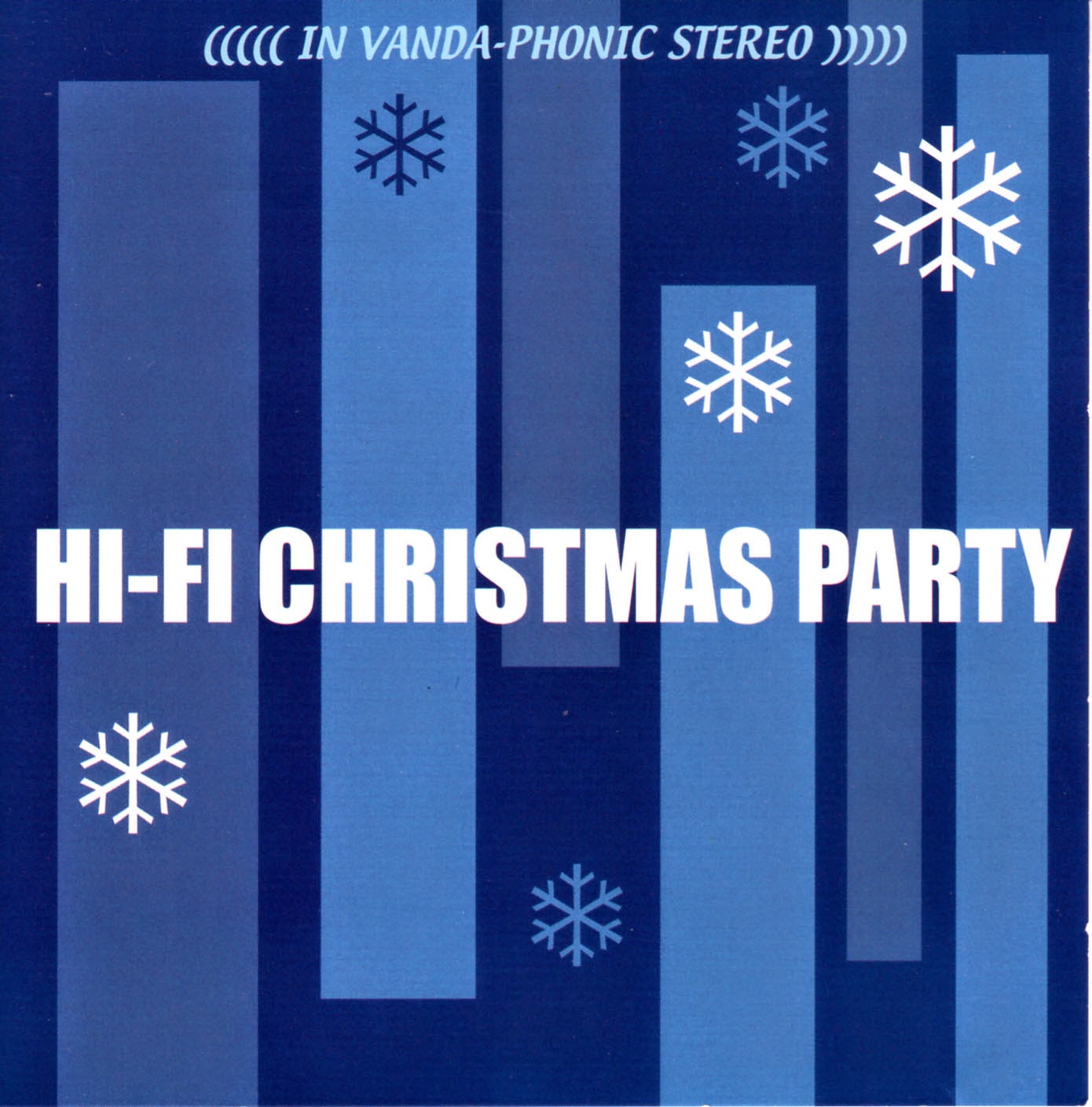 Today, Broken Hearted Toy offers a tip of the Santa hat to all the musicians and music industry people who have harnessed the power of rock and roll for the benefit of humanity. From big stars like George Harrison and Graham Nash to the local guys who see a comrade in need or a worthy cause that could use a helping hand, they deserve a note of gratitude. Especially at this time of year. Power pop musician/journalist/comic artist Dan Pavelich put together three Hi-Fi Christmas Party CDs over a number of years that benefited the Blood Center in Milwaukee. Each has been covered on BHT, but here’s an edited version with all three in one post.

Released in 2002, Hi-Fi Christmas Party was put together by vocalist-bassist Dan Pavelich to help fund research for Von Willibrand’s disease, a bleeding disorder that had stricken his daughter. This easy-going holiday compilation included contributions from several local and national power pop acts. Pavelich led his power pop band The Bradburys through the romantic and highly energetic “I Love It When It Snows!” The Jellybricks used a 1960s style arrangement on “We’ll Be Together,” and noted producer-performer Don Dixon contributed the bluesy “Christmas Is Saturday.” On the high-speed “It’s Christmas And I’m Going Home,” Rob P. & The Q’s depicted a city-dweller paying a visit his old home town.

The catchy “Christmas Morning” by Jim Babjak’s Buzzed Meg was pretty much The Smithereens without singer Pat DiNizio. Babjak’s signature guitar playing was evident, and he did a solid job on lead vocals. “Christmas Morning,” as well as Andrea Perry’s funny “Fat Aunt Bette” and Glowfriends’ spiritual “Joy Of Christmas” had also appeared on Ho Ho Spice, the 2-CD Hospice Awareness and Benefit Project. Phil Angotti’s acoustic-based “Getting Home (for Christmas)” cleverly mixed references to the three wise men, It’s A Wonderful Life, and A Christmas Carol. The Ted Ansani Trio featured the Material Issue member playing drums, bass, and vibes on a breezy, lounge style instrumental called “The Kriss Kringle Jingle.” Lisa Mychols paid homage to the girl group sound of the early 1960s with her “Listen To The Bells Ring” while October Elsewhere evoked The Kinks on their melodic “Christmas Every Day.” Other contributors to Hi-Fi Christmas Party included The Spongetones, The Lolas, Bill Lloyd, Jeremy, John McMullan, Dom Mariani, and Cool King Chris.

On Hi-Fi Christmas Party Volume 2, the focus was once again on original 1960s-style power pop, although The Elvis Brothers traveled back a little further on their very fun “Rock-A-Billy Christmas.” The harmonies and big production values on Lisa Mychols & Wondermints’ “Lost Winter’s Dream” were reminiscent of Leslie Gore’s Top 40 hits; and Husky Team, which included Smithereens drummer Dennis Diken, delightfully mashed “Auld Lang Syne” with “Green Onions.” The Grip Weeds’ “Christmas, Bring Us” evoked The Move and The Who, and Jeremy tapped into that same era for his spiritually inclined “It’s That Time Of Year.”

The Bradburys, with Dan Pavelich on vocals and rhythm guitar, used a melodic, mid-tempo arrangement on the romantic “A Christmas Wish,” and Sketch Middle sounded like Material Issue on the irresistible “Turtlenecks & Eggnog.” Rob Paravonian used high-speed guitars and quick-rhyme lyrics on the very funny “We’re Breaking Up For The Holidays.” The Spongetones took a gentler, acoustic-based approach with “Christmas Boy” while “King Of Kings” by Joey Molland & The Echo Boys featured the Badfinger vocalist-guitarist creating a Celtic flavored rock tribute to the Christ child. The Brothers Figaro Orchestra offered an unusual take on “God Rest Ye Merry Gentlemen” that created the ambience of a Big Band era radio show.

Hi-Fi Christmas Party Volume Three followed in the amiable tradition of its two predecessors, with another selection of mostly original material. Lisa Mychols got the ornament rolling with “Joy Is In The Giving,” and Sketch Middle’s “Very Very, Merry Merry” had an energetic power pop buzz. The Jigsaw Seen’s psychedelic “What About Christmas?” was another highlight. The Click Beetles, a Pavelich side project with drummer Ed James; The Yule Logs; The Sun Kings; Jamie and Steve from The Spongetones; and Jim Babjak of The Smithereens also contributed catchy holiday tunes.

Pavelich invited a few non-power pop acts to join the party on Volume 3. Tinsley Ellis’s “Santa Claus Wants Some Lovin’,” which originally appeared on the Alligator label, was a clever blues romp, and Ash Can School channeled early Chuck Berry on “Christmas List Boogie.” The Brothers Figaro Orchestra went all the way back to the Roaring 20s for a swell take on the standard “Jolly Old St. Nicholas.”
Posted by Terry Flamm at 11:08 AM