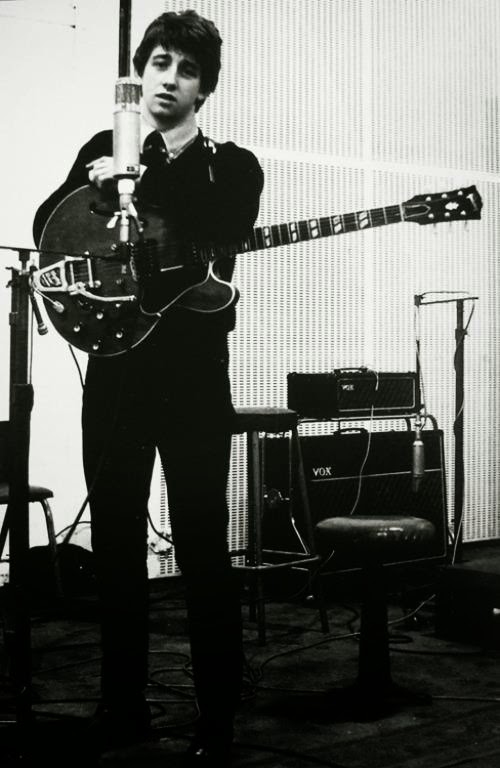 If you could take a look at my Facebook feed today, you’d quickly realize that December 16th is the birthday of Hollies guitarist-harmony vocalist Tony Hicks. The Chicago band Go Time! included him in its daily rock and roll birthdays list, and other musicians are weighing in with tributes. Singer-guitarist Phil Angotti posted a video of “Stop Stop Stop” and Dennis Diken, the drummer for The Smithereens, posted a clip of The Hollies performing “On A Carousel” at Abbey Road Studios in 1967. The A Hollies Appreciation page on Facebook is teeming with best wishes, along with video clips and rare photos of Hicks from throughout his expansive career.

That “On A Carousel” sequence can be found on a DVD called The Hollies - Look Through Any Window 1963 – 1975  that’s part of the British Invasion series from Reelin’ in the Years Productions. With a running time of 184 minutes, it’s a must-have for any Hollies fan, and includes interviews with Hicks, Graham Nash, lead vocalist Allan Clarke, and drummer Bobby Elliott (whose birthday is December 8th). It offers conclusive evidence of why many musicians, including Little Steven Van Zandt, regard Hicks as one of rock’s better and most under-appreciated guitarists.

Hollies fans would also be pleased with Ken Sharp’s recent book Play On! Power Pop Heroes Volume No. 1, which includes 30 pages of quotes from Graham Nash, Allan Clarke, and Tony Hicks. There are also quotes from members of The Move about Carl Wayne, who fronted The Hollies for a few years after Clarke retired. There are also interviews with Ringo Starr, members of The Beach Boys, The Zombies, The Kinks, Badfinger, The Bee Gees, The Small Faces, The Who, The Byrds, The Dave Clark Five, and other artists Sharp considers to be progenitors of power pop. You can pretty much turn to any page and find a fascinating quote about how a hit song was recorded or how a particular musician felt about it. I hasten to add that this was a limited-edition release and is probably very hard to come by at this point. Keep an eye out for Volumes Two and Three of Play On!, which will focus on power pop acts that came along in later years.

In honor of Mr. Hicks’ birthday, here’s what he told Ken Sharp about that “On A Carousel” recording session: “I remember everything about recording ‘On A Carousel’. I had a very strange guitar sound with a Vox amplifier that had a midrange boost. I used one of the guitars that I had bought from a pawn shop in America.” Speaking of the U.S.A., here’s another quote from Tony Hicks:  “The enthusiasm from the American people to what we do is quite staggering. I mean, I remember when we got back together with Graham Nash and made an album called What Goes Around and we did dates in America. We did loads of press. What was amazing is all of the press was so very positive and excited about it. . . . They were really enthusiastic about what we were doing and what we wanted to do and that was really refreshing, and it’s still the same today.”

Which brings up an interesting point. Hicks and Bobby Elliott still tour with the current lineup of The Hollies throughout Europe, but they haven’t been to the States since a smattering of dates in 2002. So happy birthday to Tony Hicks, along with the hope that he’ll grant American Hollies fans their wish and come over here on an extended tour.
Posted by Terry Flamm at 10:54 PM