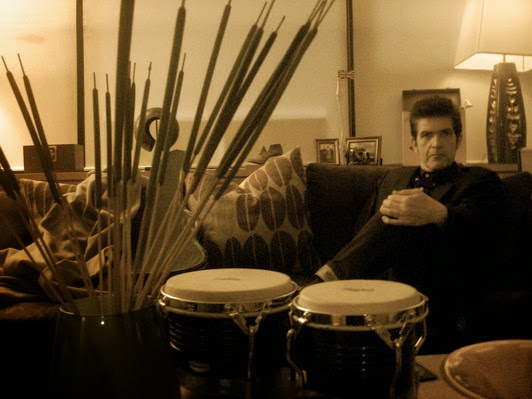 Singer-songwriter Edward Rogers has been getting more attention recently as the opening act on his longtime friend Colin Blunstone’s solo tour, but he’s been a familiar face as a performer and show producer on New York’s club scene for a number of years. His latest release KAYE is a collection of love songs and compelling tales, delivered in a resonant vocal style that’s reminiscent of David Bowie at times. There’s also a hint of Graham Nash in Rogers’ phrasing and the way he mixes personal reflections and political views.

Rogers leaves no doubt as to which artist he draws the most inspiration from, by adding a dedication to Kevin Ayers on the KAYE CD sleeve. The title is derived from Ayers’s name, and the song “Kaye,” a touching, almost spoken-word piece with the feel of a pub tune, describes the late musician’s songwriting skill as well as his troubles with substance abuse. Rogers also captures the fun romantic fantasy of Ayers’ catchy tune “After The Show.”

“No Color For Loneliness” is a guitar-driven song about missing an ex-lover, and “Street Fashion,” takes a satiric poke at trendsetters, while “My Street” and “What Happened To The News Today” tackle social issues. Rogers’ only misstep on KAYE is the experimental “Peter Pan’s Dream,” a lengthy fable that gets bogged down with too many cliches. In contrast, the gorgeous and mostly acoustic “Borrowed And Blue” is a heartbreaking look at a marriage coming apart at the seams.
Posted by Terry Flamm at 11:04 PM