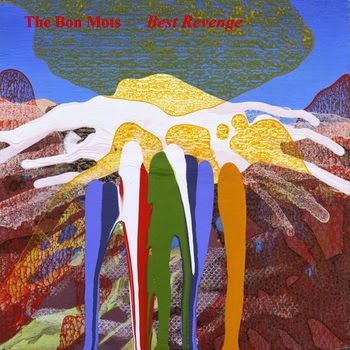 The recently released Best Revenge is only the third effort from The Bon Mots, following Forty Days And Forty Nights from 2007 and their 2003 debut le Main Drag. I reviewed le Main Drag for the Illinois Entertainer back when it first came out and remember admiring the Chicago-based band’s easy-going method for crafting catchy pop songs. Melodies remain a priority for songwriters singer-guitarist Mike Coy and singer-guitarist Eric Chial on Best Revenge, and with bassist Chris Frantisak and drummer Neal Ostrovsky contributing backup vocals, the harmonies are also consistently strong. Coy and Chial’s guitar playing has a harder-edge here, and The Bon Mots are drawing from a wider range of influences.

“Galahad,” with its shuffling beat and light arrangement, is the track that most resembles the approach on le Main Drag. “All The Way (Down)” and “Flaw In The Design” are energetic indie rock tunes reminiscent to Smoking Popes, while the mysterious “Under Pavement” taps into 1970s R&B. “Overblown” is another prime example of the band’s knack for enticing melodies, and “Granted,” a song of support for a woman who seems destined for disappointment and heartache, sounds like it could have been recorded by Big Star.
Posted by Terry Flamm at 11:07 PM