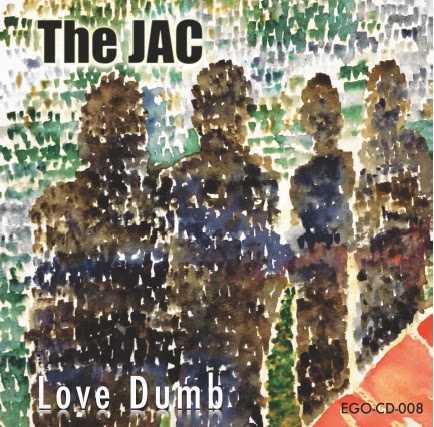 Australian singer-multi-instrumentalist Joe Algeri  has played in his share of bands over the years, most recently with the international power pop trio The Britannicas. He occasionally has put out solo efforts under the name The JAC, but on the new five-song EP Love Dumb, Algeri is backed by guitarist-vocalist Dave Wallace, bassist-vocalist Jason Clearly, and drummer-vocalist Mark “Sid” Eaton. Algeri continues to bring his offbeat perspective to catchy arrangements, but The JAC also experiment with a few different styles.

The power pop oriented title track depicts a guy wondering why he’s still in a relationship when both he and his significant other are disillusioned with it. “Frantic Romantic” is a fun song originally done by the Aussie band The Scientists back in 1979, and The JAC use a similar synthesizers and a drum machine arrangement behind goofy lines like, “I like to have nice girls,” and “I touched her lips/I kissed her hips.” Algeri goes acoustic with a cover of Big Star’s “Thirteen,” and “Truly Julie And Terry,” his reflection on the young lovers from The Kinks’ “Waterloo Sunset.” The ringing guitars and harmony vocals on “Wherever You Go” show an unmistakable Byrds influence.
Posted by Terry Flamm at 10:47 PM