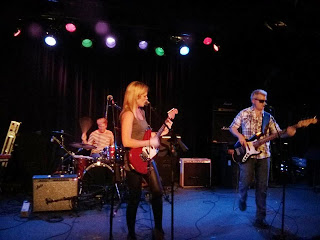 Photo Of Metropollly as Liz Phair By Alex Bruscino.

“The Wilburys are here in their astral bodies,” one of The Shams quipped shortly after the band had started its tribute to The Traveling Wilburys at Martyrs’ Pub last Friday night. In costumes to look like George Harrison, Tom Petty, Bob Dylan, etc, the band members were part of the annual Halloweekend Tribute Band event. It was disappointing to find that for some reason, Halloweekend was cut down to one night this year, but at least the truncated lineup was an imaginative one. In addition, to The Shams, who opened with a spirited take on “Heading For The Light,” Halloweekend offered Will Phalen and The Stereo Addicts as Beck; Rm:509 as PJ Harvey; Phil Angotti as The Doors; Metropolly as Liz Phair; and The Dirty Pigeons as Ozzie Osbourne.

I hadn’t seen Will Phalen and The Stereo Addicts before, but their short set of Beck material was impressive enough to put this band on any rock fan’s radar. As Phalen rapped through “Loser,” The Stereo Addicts created a tight groove behind him. “Where It’s At,” with Phalen manning the megaphone, was another highlight.

Rm:509 fielded some familiar players in its tribute to PJ Harvey. I’ve only seen Ripley Cain in singer-songwriter mode, but she adapted well to her role as this band’s front woman. She wasn’t the only one singing lead though. Vocalist-guitarist Yvonne Doll, who also fronts The Locals, and drummer Joanna Vassilatos also took turns; and all three had strong voices. Christy Nunes, another member of The Locals, played bass in her patented head-bobbing style. Rm:509’s hard-charging performance on songs like “Down By The Water” and “Rid Of Me” was markedly different from the more subtle way Tuffy UK interpreted the eccentric English singer at last year’s Halloweekend, but both approaches were valid.

Singer-guitarist Phil Angotti’s between-song patter as Jim Morrison seemed a bit cartoonish during his set as The Doors, but that could have been what he wanted for a Halloween gig. Vocally, he was on the mark, and the musicians he chose to back him were first rate. They played an extended version of “Light My Fire,” plus “Roadhouse Blues,” “L.A. Woman,” “Love Me Two Times,” and “Break On Through (To The Other Side)”.

It wasn’t until Metropolly opened its set as Liz Phair with the ribald “Flower,” that I realized what a challenge lead vocalist-guitarist Holly Senchak took on this year. Although Phair is a ground-breaking, critically acclaimed artist, she has never been known for dynamic live performances. On “Flower,” it looked like Senchak was singing along with her own pre-recorded vocals, which worked, but might have confused some audience members unfamiliar with the song. She was triumphant throughout the rest of the set, rocking through a history of Phair’s best songs, including “Never Said,” “Supernova,” “Polyester Bride,” and “Fuck And Run.”

The Dirty Pigeons were on hand to bring the event to a head-banging finish as Ozzie Osbourne, but time and travel restraints kept me from staying for them. All in all, this was another entertaining edition of the annual fest, but here’s hoping Halloweekend reverts back to its customary two-day format in 2014.

By the way, if any of the participants are wondering who to cover next year, they can check out my October 2nd post for some suggestions. Ms. Senchak was kind enough to comment favorably on my idea that she join forces with The Webstirs to cover The Bangles.