Book It: Shoes Know The Secret Of Longevity 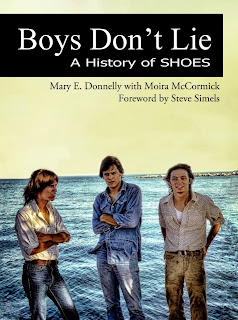 A few minutes before she and Mary E. Donnelly started their book reading and signing event at The Book Cellar  on Lincoln Avenue this past Saturday night, Moira McCormick overheard two customers talking about the song playing on the store’s overhead system. Hearing the guys wonder if it was by Shoes, McCormick quickly spoke up; telling them it indeed was Shoes and that the band was on the premises.

Donnelly and McCormick had come to Chicago to promote their book, Boys Don’t Lie: A History Of Shoes, with Jeff Murphy, John Murphy, and Gary Klebe helping out. I had read about the band members coming, but assumed they would just be providing moral support. But after Donnelly and McCormick had taken turns discussing and reading from Boys Don’t Lie, the Murphy brothers and Klebe moved front and center to take questions from the audience. The results were enlightening and entertaining.

At the start of the event Donnelly, a founding writer for the PowerPop blog, revealed that she discovered Shoes via her older brother when she was 12 years old. In her later years, a correspondence with Jeff Murphy blossomed into an opportunity to write a book about the band. McCormick, whose impressive journalistic resume includes writing for the Illinois Entertainer, along with several other publications, was brought in to help out. At The Book Cellar, Donnelly read a segment from Boys Don’t Lie about the time Shoes tried unsuccessfully to get their label Elektra to bankroll some rock videos in light of an urgent request from MTV. McCormick read an account of Shoes exploring an offer from Kiss member Gene Simmons to record for his new label.

When the Murphy brothers and Klebe sat down to take questions, they were personable and honest in their responses. All three seemed to agree that the key to being able to stay together for almost 40 years despite the lack of any big-time success, was the respect and admiration they have for each other. Of course, it doesn’t hurt that all three members have a knack for writing memorable pop tunes, and they create gorgeous harmonies. After the presentation, Donnelly and McCormick joined the members of Shoes in signing copies of Boys Don’t Lie: A History Of Shoes, and seemed to be doing a brisk business.
Posted by Terry Flamm at 9:57 PM