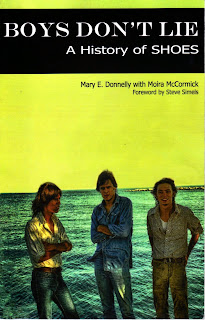 It’s a safe bet that most Shoes fans are pretty much familiar with how the Zion, Illinois-based band overcame the inept policies of their major label and became legendary pop stars who started and ended up with their own record company. Boys Don’t Lie: A History Of Shoes, written by Mary E. Donnelly with Moira McCormick, fleshes out that story via extensive research and interviews with the band members, music biz insiders, and people from the media. Donnelly is a founder of the PowerPop blog, as well as well as a college professor, and McCormick has covered pop culture for several publications.

John and Jeff Murphy, Gary Klebe, and Skip Meyer come across as sincere and likable, and their determination serves as inspiration for creative types everywhere who are faced with adversity. These musicians also provide a fascinating behind-the-scenes look at their process for creating irresistibly catchy pop songs with intricate harmonies that still resonate decades after they were recorded.

Donnelly reaches back to childhood days of the Murphy brothers and Klebe, long before they ever played a note of music together. It’s a debatable approach since these guys aren’t major historical figures or celebrities, but it does help her establish their distinct personalities. And there are fun anecdotes, such as how John Murphy and Klebe first became friends while working on an underground newspaper at their high school, or how John Murphy drew cartoons of himself and his friends as big-time rock stars. A more touching revelation is that the Murphy brothers were never close to their father, and weren’t particularly upset when he abandoned them while they were still young. Their mother would soon remarry.

As much as Donnelly keeps these early chapters engaging, Boys Don’t Lie definitely picks up speed after the Murphy brothers and Klebe start getting national attention with Black Vinyl Shoes, their third self-released album. (Even some ardent Shoes fans might not have known that the first two were One In Versailles and Bazooka.) And when Donnelly describes how the band (with newly recruited drummer Skip Meyer) checked into a posh recording facility called The Manor in London to work on their Elektra debut, Boys Don’t Lie becomes hard to put down.
Posted by Terry Flamm at 10:42 PM

Loved it, Quite a good read.A+

their talent showed much earlier as in grade school. We always knew they had a great future.