It’s All Part Of My Rock And Roll Fantasy, Part 1 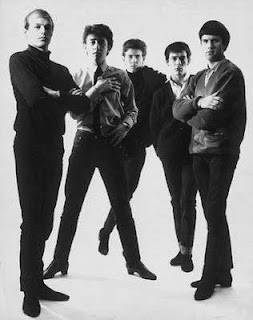 These guys are long overdue for a Halloween tribute. Photo from The Hollies Facebook page.

October is that time when empty stores erupt with monsters, vampires, and headstones engraved with bad puns. People start planning what costumes they’ll buy or make, while homeowners transform their front yards into elaborate torture chambers. Trick or treat anyone?

Here at Broken Hearted Toy, the emphasis is on the multi-tribute band showcases that manifest themselves on weekends around All Hallow’s Eve. Usually, five or six local acts take on the identities of famous recording artists during short sets.

The schedule has already been announced for Halloweekend at Martyrs on October 25th, but here are a few suggestions for match-ups I’d like to see at other clubs or at some point in the future. Consider it a musical version of fantasy football. For the most part, my suggestions for Honorees (H) are ones that haven’t already been done. I’ve picked an Appropriate Local Act (ALA) for each, and in some cases, made two suggestions.

(H) The dB’s. The reunited power pop band released Falling Off The Sky in 2012, adding new choices to an already potent body of songs.
(ALA) Androgynous Mustache.  They were suitably loud and unruly as The Replacements at Halloweekend at Martyrs last year, and are veterans of tribute shows.
Or: (ALA) The Webstirs.  Their original CDs are filled with catchy pop tunes, and they brought down the house when they added a horn section for a set of songs by Chicago at Halloweekend at The Abbey Pub two years ago.

(H) The Hollies. The British Invasion group had Top 40 singles over three decades, from “Look Through Any Window” to “The Air That I Breathe,” along with a wealth of masterful deep album cuts.
(ALA) Phil Angotti. He draws inspiration from the 1960s for his original songs, and he’s already done tributes to The Bee Gees, Squeeze, and Paul McCartney.
Or (ALA) The Abbeys. The gorgeous harmonies of The Everly Brothers were an inspiration for Hollies founding members Graham Nash and Allan Clarke, and they’re also the template Mike Cohen and Jeff Janulis use for the catchy power pop songs they perform as The Abbeys.

(H) The Bangles. A four woman band did an okay job covering The Bangles at Halloweekend at The Abbey Pub a few years ago, but they concentrated on the hits while their over-flirtatious mannerisms portrayed The Bangles as nothing more than the video vixens of “In Your Room.” Power pop fans know The Bangles deserve better, and that could be achieved by delving into deep cuts like “Hero Takes A Fall,” “Some Dreams Come True,” and “Tear Off Your Own Head.”
(ALA) The Webstirs with guest vocalist Holly Senchak. This combo was a knockout at last year’s Halloweekend at Martyrs when they covered ABBA, even for those of us who aren’t particularly ABBA fans. Senchak was just as effective channeling Agnetha and Anni-Frid, as she was being Courtney Love when her band Metropolly performed as Hole in 2011.
Or: (ALA) The Valley Downs.  Lead singer Marianne Shimkus is a dead ringer for Vicki Peterson’s vocal style at times, and her husband, bassist-backup vocalist Mike Galassini writes catchy pop songs for The Valley Downs and his other band, 92 Degrees.

Coming tomorrow: More local musician/famous artist match-ups. Feel free to email me with any additional pairs, but try to steer away from over-hyped celebrities.
Posted by Terry Flamm at 11:18 PM

oh man, the bangles would've been great!! halloweekend gets booked months in advance. we'll have to use this for next year. ~holly