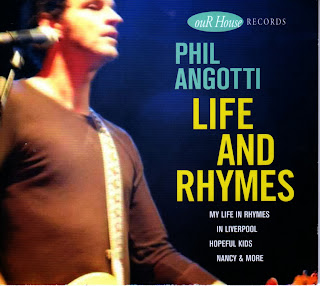 Listening to the thought-provoking lyrics on Phil Angotti’s latest CD, it’s easy to see why he named it Life And Rhymes rather than something like Boy Meets Girl. As with his last effort, People And Places, Angotti is working with more mature subject matter—literally life and death. That he’s able to blend these themes with his long-time love of 1960s music makes Life And Rhymes all the more impressive.

When the CD kicks off with “Hopeful Kids,” a wistful look back at childhood friends and what became of them, there’s an initial feeling that Angotti has already covered this ground. But he gives the song a distinctive sound all its own, and explores a number of genres on the 11 that follow it. Several musicians help out on Life And Rhymes, mostly ones who’ve worked with Angotti before, such as keyboardist-vocalist Carolyn Engelmann; bassist-vocalist Casey McDonough; drummer Tommi Zender; co-producer (with Angotti) and keyboards player Charlie Piper; keyboards player-vocalist Ellis Clark; and Handcuffs members singer Chloe F. Orwell and drummer Brad Elvis.

“Too Late Tomorrow” is an ambitious Beatles style anthem that finds Angotti supported by four back-up vocalists and Chuck Bontrager’s strings. “Out Of Thin Air” is similar, evoking Electric Light Orchestra and Oasis. On the flip side of that, Angotti takes a spare but engaging approach on “In Liverpool,” a celebratory tune about hanging out in the birthplace of his heroes.

Two of the better songs here exude an other-worldly ambience. The mysterious “I Might Come Back” reflects on reincarnation via a melodic arrangement that could have come from George Harrison, while “I See Spaceships” is a rollicking finale that combines “Eight Miles High” and “Hey, Mr. Spaceman” by The Byrds. “Daddy’s Country Records” is a toe-tapping novelty song that depicts Angotti’s father advising him to play country music instead of 60s pop. Based on Life & Rhymes, let’s hope he doesn’t listen to his old man.
Posted by Terry Flamm at 9:14 PM