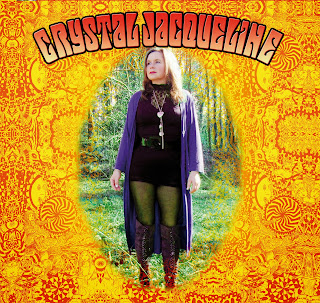 Singer-keyboards player Crystal Jacqueline was already an active player in Britain’s prog rock/psychedelic scene before releasing her new solo effort, Sun Arise. She’s a founding member of the band The Honey Pot and she joined forces with musician Mordecai Smythe and radio personality/vocalist Marrs Bonfire to record obscure 1960s cover versions under the name, The Green Question Mark. A few of the songs on Sun Arise were previously released as a 45 on the all-vinyl label, Fruits de Mer.

Throughout Sun Arise, Crystal Jacqueline avoids prog rock over-synthesized cliches in favor of more inventive arrangements. On energetic songs like “A Fairy Tale,” originally recorded by Second Hand, and “Dream I,” she seems to command the elements of the universe to swirl around her as she spins tales via her atmospheric keyboards and vocals. On “By The Way” she blends piano and layered vocals in a medieval arrangement that’s both ominous and romantic. The melodic “I Break” is also steeped in Old World folk music. The title track opens with hypnotic chanting before introducing a boogie guitar sound reminiscent of Norman Greenbaum’s “Spirit In The Sky.”

Crystal Jacqueline puts her own stamp on the The Troggs’ “Cousin Jane” and The Rolling Stones’ “Play With Fire,” and reinvents Gordon Lightfoot’s easy-going “Sundown” with a spare, techno approach.
Posted by Terry Flamm at 9:46 PM