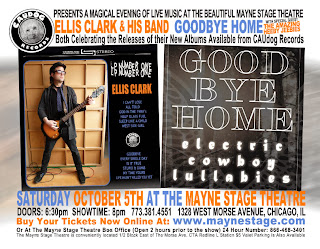 Happy Anniversary to my lovely wife Pam. We were married right here in Palatine, IL seventeen years ago as of tomorrow. Thanks for all your love and support, Sweeeeeeeeeetie.

The Handcuffs are taking time out from working on their fourth CD of catchy indie rock to headline a triple bill at 27 Live in Evanston tonight, along with post-punk band I Lost Control and sci-fi alt rockers Tomorrow The Moon. The show starts at 9:30 PM.

CAUdog Records presents an all ages double record release party tomorrow night at Mayne Stage, as Ellis Clark officially unveils his new solo effort, LP #1, and Goodbye Home serves up its Electric Cowboy Lullabies. The Heeby Jeebies are also on the bill. The show starts at 8:00 PM, Mayne Stage is located at 1328 Morse Street on Chicago’s north side.

I’ll be among the writers and artists taking part in the 4 Minutes Of (Literary) Fame showcase on October 21st at the Tokio Pub in Schaumburg. I’ll be reading from my yet-to-be-published rock and roll novel, Finding Manchester. Other participants include writers (and event organizers) Kym Brunner, whose novel, Wanted: Dead Or In Love is due out next year; Cherie Colyer, author of the teen/paranormal novels Embrace and Hold Tight; and Young Adult/Middle Grade author Katie Sparks.  I’ll have more info on this event in the near future.

Singer-guitarist Terry Sylvester, who replaced Nash in The Hollies back in 1969, and stayed with the band through 1981, will be performing with John Ford Coley of New England Dan and John Ford Coley fame (“I’d Really Love To See You Tonight”), next Friday night at the Arcadia Theatre in St. Charles. Show time is 8:00 PM.

I read in the Tribune yesterday that Ellen DeGeneres, one of the most naturally funny people in entertainment these days, was in Chicago this week to film bits for her daytime TV show. A few years ago, I tried to simultaneously plug my blog and power pop by asking DeGeneres to become a champion of the genre. I even started a Ellen Fans Who Love Power Pop group on her official site. But nothing ever came of it. Aaaaaaaanyway.

Ralph Covert and The Bad Examples will be celebrating the 20th anniversary of Covert’s solo debut, Eat At  Godot’s with a show at FitzGerald’s in Berwyn next Saturday, October 12th. The press release notes that while some of the songs from this effort would later become part of The Bad Examples’ repertoire, other more rare tracks will be performed exclusively at FitzGerald’s.
Posted by Terry Flamm at 12:16 PM