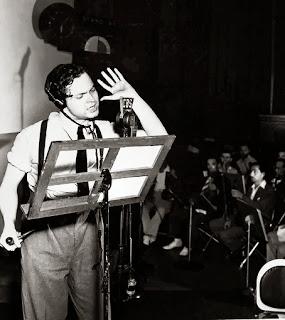 “Some day, this will be on a Phil Angotti CD!” Orson Welles performing War Of The Worlds.

Following a tradition that began on Broken Hearted Toy in October of 2009, here’s a profile of a song that’s well-suited for the Halloween season. For more Halloween songs, check the month of October for each year in the BHT archives.

“I See Spaceships” might be the only rock song that simultaneously evokes The Byrds and The Who while spinning a tale of intergalactic visitors who love to party. Amazingly, this whirlwind of vintage rock from Phil Angotti’s recent Life And Rhymes CD was conjured by just three musicians: Angotti on guitars; Casey McDonough on bass; and Brad Elvis on drums. If you’re looking to create a Halloween playlist, you might want to sandwich this Roger McGuinn/Keith Moon homage between the lighthearted “Mr. Spaceman” by The Byrds and the more ominous “They Are Among Us” by The Redwalls.

“I’ll tell you my story but you won’t believe me,” Angotti predicts as the song kicks off. He goes on to describe how the little green men who crash-landed their saucer in his garden are now driving his car, and staying up late to party. Angotti, a 1960s fanatic, specifies that these Martians are listening to LPs (as opposed to iPods) and watching movies. They’re also often intoxicated, which might explain why their calls for help to their planet have gone unanswered. Maybe they keep dialing the wrong number. With all the rowdy behavior going on, it’s tempting to think Angotti’s homeowner is near-sighted and is really watching the neighborhood teenagers.

Whoever they are, this guy isn’t about to do a Clint Eastwood and tell them to get off his lawn. “I hope that they stay here, at least until Sunday,” Angotti sings. “I See Spaceships” has a rousing instrumental coda featuring Angotti, McDonough, and Brad Elvis, with a snippet of Orson Welles from his notorious War Of The Worlds radio broadcast layered on top.
Posted by Terry Flamm at 11:11 PM