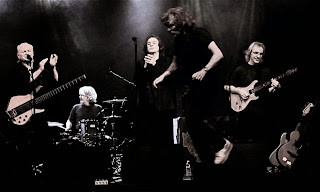 I posted a few bits for Slumgullion earlier today, but here’s a much bigger helping.

See These Eyes So Green. Cat enthusiasts (and I see plenty on Facebook, especially among musicians) might want to drop by the Internet Cat Video Festival that’s being held at the Irish Heritage Center on Chicago’s northwest side tomorrow. The festival features some of the more popular cat clips from the Internet. The first screening is at noon.

It’s The Time To Honor The Zombies. The Rock And Roll Hall Of Fame has announced 16 nominees to be inducted in 2014. A serious case could be made for several of these acts to make the final cut. For example: Nirvana didn’t invent grunge but they brought it to the world’s attention; ditto for Yes and prog rock; NWA pioneered a harder, more confrontational breed of urban contemporary music; The Paul Butterfield Blues Band fused the bond between blues and rock; Linda Ronstadt’s voice helped define a decade; Deep Purple helped usher in heavy metal, and Jon Lord’s distinctive keyboards playing remains highly influential; and The Replacements’ unbridled approach inspired countless bands that followed after them.

But if I have to pick a favorite—and that’s what I’ve done for the past few years—I’m going with The Zombies. They were one of the British Invasion’s more experimental bands with hits like “Tell Her No,” “She’s Not There,” and “Time Of The Season” that haven’t lost a bit of their allure over the decades. No wonder founding members Colin Blunstone and Rod Argent are still bringing The Zombies to appreciative audiences.

Tale Of Two Literary Events. Authors Mary E. Donnelly and Moira McCormick will be in Chicago tomorrow night signing copies of their new book, Boys Don’t Lie: A History Of Shoes at The Book Cellar on Lincoln Avenue. My two-part review of this engaging bio of the Zion, Illinois based power pop band was posted on BHT earlier this week.

This coming Monday, the writers group I’ve belonged to over the centuries is staging its Four Minutes Of Fame: A Stand-up Literary Event at the Tokio Pub in Schaumburg. I’ll be reading a chapter from my rock and roll novel, Finding Manchester, and other writers will be presenting their work. Please see yesterday’s post for a full profile on this event.

How Much Is That Floyd Guy In The Window? It’s not often you see a huge poster of Syd Barrett hanging in the window of a department store on Chicago’s Magnificent Mile, but the Pink Floyd eccentric is the cover boy for fashion designer John Varvatos’ new book, Rock In Fashion. The shot was taken by noted photographer Mick Rock, who’ll be joining Varvatos and ZZ Top for a book launch and discussion at Nordstrom’s Michigan Avenue location on October 22nd from 6:00 to 7:30 PM.

This Is This Guy On His Own. John Petitt, vocalist and guitarist with local band This Is This, has recorded a solo version of his “Sorry Don’t” and posted it to SoundCloud. The soulful rock tune originally appeared on the band’s The Hours, The Minutes And The Days CD.

Well, How Did It Get Here? Anyone who’s ever wondered what a Brit free paper looks like (sort of their version of The Reader or Illinois Entertainer) can find one at the Reckless Records downtown location. Beat is a large format, London-based publication stuffed with eye-popping full-page photos and profiles of indie rock acts. Hip hop artist M.I.A. is the cover story for the Autumn 2013 issue.

The Dawn Of Digital. Guitarist-singer James Moeller and singer Carla Hayden of whitewolfsonicpricess, an alt rock band with a theatrical bent, have announced that their 10 + 1 album is now available in digital format on their bandcamp page. Whitewolfsonicprincess also has a Live At St. Luke’s 5-song digital release for sale.

Twigs TV. Fraternal twins Laura and Linda Good of The Twigs have created a light-hearted video that’s a perfect fit for “Baby, Don’t Cry,” from their recent children’s CD, Jump Right In.

Dot Dot Dot: Don’t Do It.  The popular co-ed synth rock band Dot Dot Dot has a gig scheduled for October 26th at the H.O.M.E. Bar in Arlington Heights, and it looks like this is going to be their last. This is reportedly due to the departure of founding member, guitarist Rose, who’s moving to the West Coast.

If that’s the only reason, (I don’t have all the info on this) at the risk of seeming callous, I’d like to ask the remaining band members to reconsider. First, I doubt Rose wants the band to implode. Second, I know your fans want you to stick around. Third, you’ve all worked too hard to build a reputation as one of the area’s best festival bands to just walk away. Plus, with modern technology, there are ways Rose could still record music with you.

Several bands over the years have survived the departure of a key member and continued to thrive. Heck, when I quit my comedy group Famous In The Future after 20 years, they threw a party. Not really, but they did move on and they continue to create funny skits and songs. That doesn’t diminish the role I played I previously, any more than Rose would be slighted if Dot Dot Dot went on without her. So take some time off, but give some serious thought to coming back again.
Posted by Terry Flamm at 11:05 PM