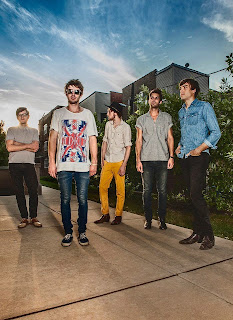 To paraphrase that most interesting man from the Dos Equis commercials, I don’t always see seven music acts within 24 hours, but when I do, I write about it on Broken Hearted Toy. Here’s a brief rundown on how I spent the first half of the Labor Day weekend.

Tributosaurus was in the midst of “Carry On” from the Crosby, Stills, Nash and Young LP,  Deja Vu, when my wife Pam and I arrived at the Taste Of Polonia festival at the Copernicus Center in Jefferson Park on Friday night. A serious thunderstorm passing through the area had threatened to cancel the well-known cover band’s CSN and Y homage. There were at least nine musicians onstage, with the front four taking turns on lead vocals. Joining forces, they perfectly captured those Crosby, Stills and Nash harmonies on “Helplessly Hoping,” “Teach Your Children,” and “Guinnevere.”

Along with the hits “Southern Cross” and “Just A Song Before I Go,” the band covered deep tracks like “Almost Cut My Hair” and “Deja Vu,” while making the occasional side trip into Neil Young solo territory for songs like “Alabama.” Tributosaurus has stated they love covering Crosby, Stills, Nash and Young; it would be fun to see them do a show of Byrds, Buffalo Springfield, and Hollies covers.

On Saturday afternoon, I dropped by the Remix Chicago street festival on Milwaukee Avenue and caught sets by Secret Colours, who looked younger than I had imagined from listening to the swirling, psychedelic rock on their CDs; former Treaty Of Paris vocalist-guitarist Daniel Wade, whose guitar-driven songs sounded like they could notch some significant time on the current charts; and the band Fletcher, who mixed soaring guitars within atmospheric arrangements. It was a kick to finally see Archie Powell and The Exports, whose 2012 satirical masterpiece, Great Ideas In Action, came in a close second on the BHT list of the year’s best releases. The band ripped through cuts from the CD, like “Metronome,” “Crazy Pills,” and “Shooting Spree.”

From there, I took the blue line up to The Abbey Pub, where Ellis Clark and Phil Angotti were headlining an evening of live music sponsored by CAUdog Records. Singer-acoustic guitarist Liz Chidester, a recent transplant from Virginia, got things underway with an engaging set of original tunes and a cover of George Gershwin’s “Summertime.” Chidester has a classic folk singer delivery, but her vocals also have a bluesy playfulness at times. Her performance at The Abbey Pub bodes well for a debut release coming out within the next month.

Clark and Angotti, backed by drummer Dr. Brad and bassist Charlie Short, opened with a faithful take on The Bee Gees’ “New York Mining Disaster 1941,” and then alternated between original songs from each of their solo careers. The set included Clark’s “All Told” and Angotti’s “Out Of Thin Air,” from their new releases, LP Number One and Life And Rhymes, respectively. They tossed in a cover of the Emmitt Rhodes chestnut, “Fresh As A Daisy,” and closed with a rousing take on The Beatles’ “Hey Bulldog.”
Posted by Terry Flamm at 11:09 PM