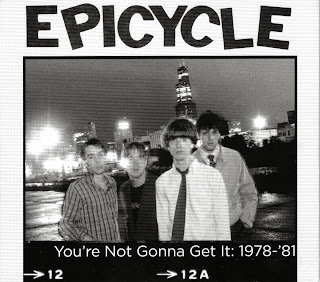 You’re Not Gonna Get It: 1978 - ‘81 makes a strong case for recognizing the essential role Epicycle played during the nascent days of the Chicago punk/indie pop scene. The recently released CD includes the quartet’s self-released three singles and LP, plus some demos. As critic Todd Killman points out in the extensive liner notes, (taken from his Victim Of Time blog) these guys formed a record company to sell their music—and a few other local bands’ music—at a time when that sort of initiative was extremely rare. And they were teenagers when they did it.

Epicycle pursued a few different styles during the three years chronicled here. “Standing On The Corner,” from 1978, has a raw punk sound, and the band was still taunting mainstream society with the defiant “Hardcore Punk” and “Radical Attitude” in 1981. “You’re Not Gonna Get It” and “Life Is A Breeze” mimic the revved-up arrangements of The Ramones.

In addition to combating racism and intolerance, Epicycle also satirized self-absorbed hipsters via the guitar-driven garage rock of “The Stare.” The melodic pop of “”High School Junkie” is ironic considering the song’s troubling lyrics, while the 1960s flavored “Biological Reaction” sounds a bit like Paisley Underground masters, The Three O’Clock.

You’re Not Gonna Get It: 1978 - ‘81 not only provides a much-needed perspective on Epicycle, it’s a treat for those who still fondly remember the vital music at that point in Chicago’s culture. One of the band’s founder’s Ellis Clark, has continued to make music with other bands over the years, and recently released the solo project, LP Number 1.
Posted by Terry Flamm at 11:02 PM