CD Review: Palmyra Delran - You Are What You Absorb 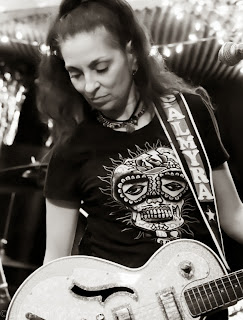 It’s easy to see why Little Steven Van Zandt is such an avid supporter of Palmyra Delran on his Underground Garage radio program. Like him, Delran seems to have equal measures of affection for 1960s garage rock and modern cutting-edge music. She’s been blending the two since her days with the New York-based band The Friggs back in the 1990s. Her second solo effort, You Are What You Absorb brims with twanging guitars, elaborate melodies, and a biting sense of humor.

This is the same songwriter who chastised a whiney acquaintance for not following through on a suicide threat with “I Thought You Said That You Were Gonna Kill Yourself” on The Friggs’ debut, Rock Candy. Delran offers more tough love on this effort. “Shut Out” scolds a woman for making a fool of herself in a dead-end relationship, while “Lies For You” concerns a guy who’s clueless about his girlfriend’s deceitful ways. With “The Turtle,” Delran creates a motionless dance for mopes who prefer to just stand around while a band is playing.

There’s an old-fashioned innocence on the wistful “Shy Boy” and on “Some Day Soon,” where Delran waits impatiently for her beau to kiss her. The songs throughout You Are What You Absorb mimic classic 1960s arrangements, whether it’s the garage rock of “You’re My Brian Jones” or The Beatles’ Revolver era feel of “Never To Be Back Again.”
Posted by Terry Flamm at 10:51 PM