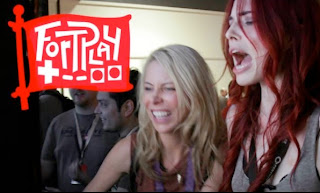 Sci-fi aficionado and Chris Hardwicke gal pal Chloe Dykstra has a new show on The Nerdist Channel called Fortplay. Dyskstra has been funny and engaging commenting on Doctor Who and covering Cosplay (people who dress up in costumes at comic-con events) for The Nerdist, so it should be interesting to see what transpires on Fortplay.

So far, she and co-hosts Whitney Moore and Michelle Morrow have done features on the Takedown Red Sabre game, and conducted a lengthy interview with Xbox bigwig Major Nelson. Not being a gamer, I felt a little out of the loop, but was still able to enjoy the segments. Hopefully, Fortplay will cover a variety of pop culture topics on future shows.

There’s good news in the current issue of Skyline, a weekly free paper that’s distributed throughout the downtown and near north side of Chicago. Those of us who missed our chance to see the Shutter To Think: The Rock And Roll Lens of Paul Natkin photo exhibit during its run at the Elmhurst Historical Museum have been given a reprieve. This spotlight on Natkin’s career as a photographer for Rolling Stone, Hit Parader, Newsweek, Time, and numerous other publications has resurfaced at the Cultural Center in downtown Chicago. He may be best known for his shots of Bruce Springsteen, but Natkin also captured The Rolling Stones, Eddie Vedder, and Johnny Cash, along with other musical legends. The exhibit will run in the Garland Gallery on the first floor of the Chicago Cultural Center through January, 4th of next year. Admission is free.


Chances are The Melismatics will be playing songs from their new Rising Tide CD when they come to Reggie’s on south State Street in Chicago on October 26th. I’m hoping to post a review of Rising Tide within the next week.

Now that I’ve finished reading Greg Kihn’s Rubber Soul novel (see Wednesday’s post) I can move on to Boys Don’t Lie: A History Of Shoes, the biography of the power pop band written by Mary E. Donnelly with Moira McCormick. I’ll post a review sometime before the authors come to Chicago for an appearance at The Book Cellar on Lincoln Avenue on October 19th.

Graham Nash’s solo tour, An Evening With Graham Nash, has been drawing some interesting guests. Jackson Browne joined Nash on stage at the City Winery in New York, and Kinks guitarist Dave Davies dropped by for a visit after another gig. Meanwhile, Nash has been picking up publicity for his new autobiography Wild Tales: A Rock And Roll Life; doing interviews on The PBS NewsHour and CBS This Morning.

Congratulations to barber/stylist Amy Peterson on her new enterprise in downtown Palatine. She’s now the proprietor of the On Track Hair Station; taking over for Colleen Farmer, who recently retired after 23 years of running the shop. Peterson, who has two decades of specializing in haircutting, is already putting her own stamp on the railway-theme decor, and has picked up a number of Farmer’s clients to join her own loyal following.


Fans of The Monkees can help get the band inducted into America’s Pop Music Hall Of Fame by casting their votes via an online survey. Some of the other nominees include The Everly Brothers,  Carole King, The Four Seasons, Simon and Garfunkel, The Supremes, Chicago, Three Dog Night, Smokey Robinson and The Miracles, Dean Martin, and Tony Bennett. Non-U.S.A. artists The Bee Gees and Elton John are also on the list. Participants can choose as many as 10, and the Top 10 vote-getters will be inducted in 2014.

The Handcuffs, Tomorrow The Moon, and I Lost Control will be performing next Friday night, October 4th, at Live in Evanston. The show starts at 9:30 PM.
Posted by Terry Flamm at 10:38 PM