He Still Writes 'Em Like That All The Time: Greg Kihn’s Latest Novel 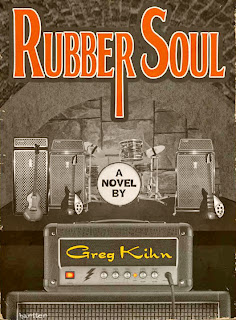 Singer-guitarist Greg Kihn is best known for hits like “Jeopardy” and “The Break Up Song” back in the 1980s. He was a radio personality for years in San Jose, and has also written four novels. For his latest effort, Rubber Soul, Kihn creates a fictional Liverpool teenager named Bobby Dingle, and drops him into the earliest days of The Beatles’ musical development.

Dingle works at his father’s shop at a flea market and uses his connections with Merchant Marines to buy the latest R&B singles from the United States. The records are a hot commodity among the Liverpool teens, so it’s not surprising when a young John Lennon and Stu Sutcliffe wander past, and are awestruck by Dingle’s selection. His ability to acquire American R&B music makes him invaluable to Lennon, who’s always looking for new material that his band can cover. A lasting friendship develops, giving Dingle a bird’s eye view of The Beatles’ rise to fame. He becomes a sort of Fab Four Forrest Gump, inspiring the lads with his records, suggestions, and occasional inadvertent comments. Kihn also lets us see America through a Liverpudlian’s eyes, as Dingle moves to Baltimore, marries a beatnik girl named Cricket, and builds a successful business.

As Rubber Soul progresses, Dingle hangs out with The Beatles during their reckless days of performing at Hamburg’s seedy night club, The Kaiserkeller; witnesses their debut on The Ed Sullivan Show in person; and eventually opens a boutique in swinging London. He becomes an essential member of their tour, and in the tense final chapter, it falls to Dingle to save them from certain death.

It’s fun to see vibrant characters like Clovis, a hard-bitten but talented American musician, and Preston Washington, the owner of an East Baltimore record store called The Hi-Dee-Ho-Soul Shack, interacting with The Beatles. Kihn nails various accents and personalities, particularly with John Lennon and George Harrison. Perhaps it’s inevitable that Dingle is less compelling by comparison, but his dialogue occasionally sounds stilted and he can come across as a stick-in-the-mud. He seems particularly uptight when Lennon plays pranks on him in the early days of their friendship. Plus, Dingle’s determination to help his half-brother Clive, an escaped convict and dim-witted thug suspected of having caused Sutcliffe’s death, seems a bit of stretch.

Overall though, Rubber Soul is a fun, quick-paced tale, and Kihn has obviously done his research on Beatles history. He makes us believe a young Liverpool shop worker could not only be swept up in Beatlemania, but put his own stamp on it.
Posted by Terry Flamm at 10:23 PM